Do you know the couple in this viral wedding photo?

The lovers were photographed embracing on the side of a road, with London Bridge in the background.

A Canadian photographer was traveling in a London cab when he happened to snap a photo of a bride and groom sharing a kiss on a bridge. Now, the photographer has turned to the Internet to help track down the newlyweds, and it seems he just might have been successful.

At first, photographer Saber Miresmailli shared the photo on Facebook, with a message asking the Internet for help. 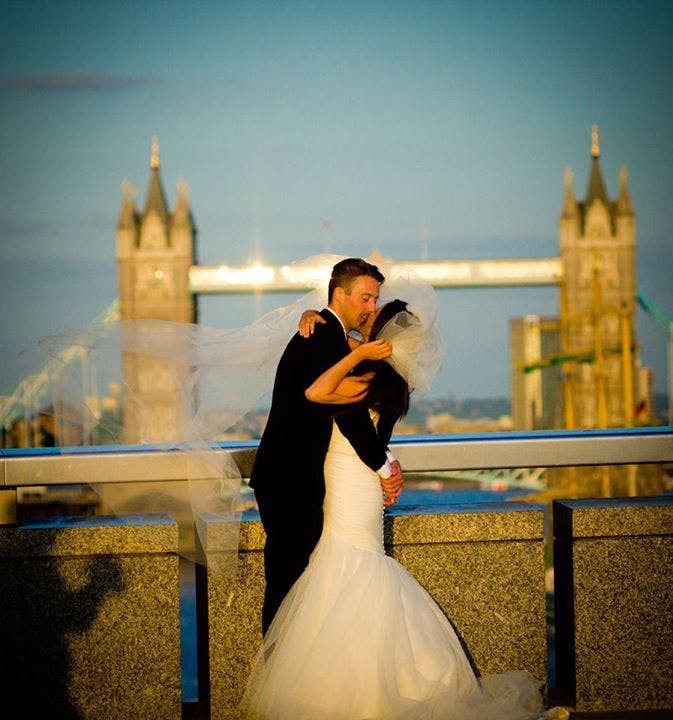 “A request to the Facebook Nation: I was on a moving car in London , UK on May 16, 2015 around 8PM when I saw this lovely couple,” Miresmailli wrote. “They were alone and I didn’t see any photographer with them. I managed to shoot this picture with them and the London Bridge in the back ground. I have the high quality picture and I love to find them and give it to them as a gift. Do you think you can share this and help me find them? Thanks!”

280,000 shares later, it seems that Miresmailli might have found the lovebirds. A Twitter user responded to a post by British news outlet Skint London, saying he knew the couple.

@SkintLondon that's my cousin Laura and her husband James!!

He then shared a photo, which he claims is from their honeymoon.

@SkintLondon this is them on honeymoon is SE Asia pic.twitter.com/oa9hTOrz8B

But Miresmailli said that all the attention has been overwhelming, and is now regretting his decision to share the photo. He even issued an apology to the couple, identified as Sarah and James by a woman who supposedly attended their wedding.

Can’t wait ’til they hop off the plane at Heathrow.