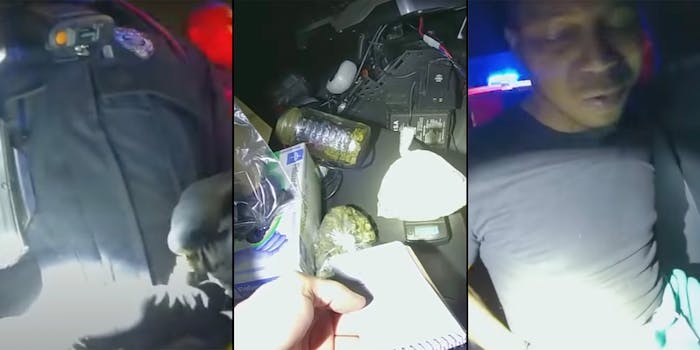 The lawsuit maintains that police 'desecrated' the dead child's ashes by testing them for drugs.

A video from a Springfield, Illinois police detainment, in which police tested the ashes of a dead child inside a small urn for drugs, is going viral following a news station posting the video to YouTube.

The incident comes from an April 2020 incident in which Dartavius Barnes was detained by Springfield police while they searched his car. While the police found nearly 80 grams of marijuana in this car, both Barnes and his father — who was also on the scene — were let go without being arrested.

In the video, though, police contemplate arresting Barnes after finding a small metal cylinder in the center console of the car.

“At first I thought it was heroin, then I checked for cocaine, but it looks like it’s probably molly,” an officer says the body cam footage published to YouTube by WISC-TV.

They even read Barnes his rights at the 6:45 mark of the video, believing the powder inside the urn to be an illicit drug.

When a cop inform Barnes that he could be arrested for the substance found in his car in addition to the marijuana, he appears confused. Then, when the cop shows Barnes the small metal urn, around the 7:30 mark of the video, Barnes is horrified, and bolts upright.

“Give me that, bro!” he says, reaching out for the urn, which the cop then pulls from his reach, repeating his earlier exclamations before adding, “That’s my daughter in there!”

Barnes is the father of Ta’Naja Barnes, a two-year-old girl who died in February 2019 of extreme neglect at the hands of her mother and the mother’s boyfriend, who are both serving lengthy prison sentences for their role in her death.

Earlier this month, a law addressing shortcomings in the state’s Department of Child and Family Services was named in Ta’Naja’s honor.

The Washington Post, in its reporting on the story, noted that Barnes is now filing a lawsuit against the Springfield Police Department and six officers involved in the detainment. The suit maintains that police “desecrated” Ta’Naja’s ashes by testing them for drugs.

The article added, “The incident is the latest to illustrate the risk of false positives in field-testing drug kits used by police, which in recent years have incorrectly detected drugs in objects including chocolate chip cookies, deodorant, breath mints and tortilla dough.”