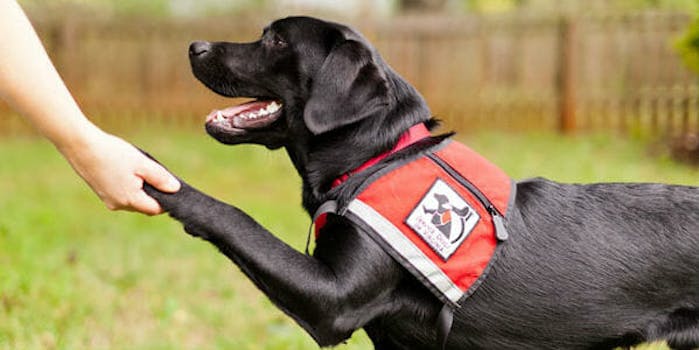 The internet is learning an important lesson about service dogs

Keeping this tip in mind could save someone's life.

Service dogs are a beautiful thing, even if we have to appreciate them from afar because of the reasonable restrictions of their day job. It’s been (mostly) common knowledge for years that you don’t touch a service dog without the permission of its owner, as the distraction might make its job harder.

But what do you do if a service dog approaches you? Tumblr user Lumpatronics shared a story that went viral after a non-threatening accident spurred their pooch into action.

“So today I tripped,” Lumpatronics wrote. “Fell flat on my face, it was awful but ultimately harmless. My service dog, however, is trained to go get an adult if I have a seizure, and he assumed this was a seizure.”

After Lumpatronics got back up, they found the dog attempting to get the attention of a nearby woman, who looked annoyed.

“She was swatting him away and telling him to go away,” Lumpatronics wrote. “So I feel like I need to make this heads up: If a service dog without a person approaches you, it means the person is down and in need of help.”

Lumpatronics, who said they experience epileptic episodes, says that if the incident were real and no one attended to them, they could choke on their vomit, hit their head, or suffer any different number of injuries. The Tumblr user said they’re working on updating their dog’s training to account for people who don’t follow its instructions.

“If what’s-his-face could understand that lassie wanted him to go to the well, you can figure out that a dog in a vest proclaiming it a service dog wants you to follow him,” they wrote.

I honestly didn't know that I was supposed to follow a service dog in a vest if it approached me by itself.

The world is a slightly better place. Well done us. https://t.co/uzVCs4zQNe

Service dogs like Lumpatronic’s aren’t the only ones providing assistance. Law enforcement agencies across the country are employing K9 units designed to sniff out elements of cybercrime.