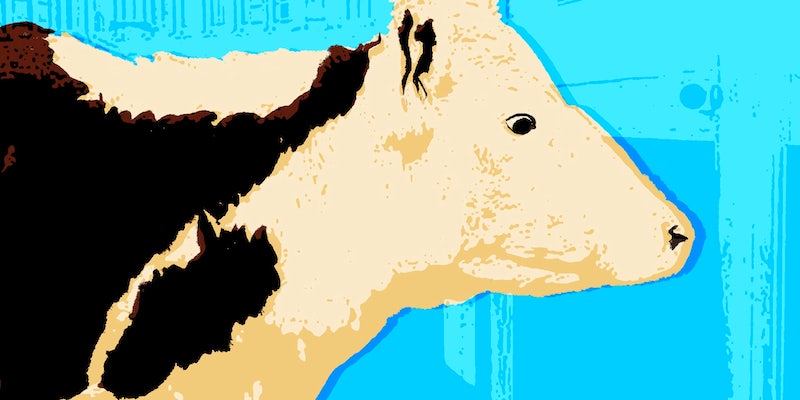 WATCH: An escaped cow led police on a chase down the streets of NYC https://t.co/BTIMOYNzXc pic.twitter.com/GqSCrhyCAM

The story of this brave animal went as far as New Zealand and Russia. And yet NYPD ending up returning him to the slaughterhouse from which he had managed to escape. He had been slated to be killed today.

But behind the scenes, animal rights advocates were furiously negotiating with police and the slaughterhouse owners for the cow’s release. He’d been smart enough to escape, they said, and he deserved to be free.

Early Friday morning, Mike Stura, owner of Skylands Animal Sanctuary in New Jersey, posted to Facebook that the rescue had been successful.

Stura told the Daily Dot, in an exclusive first interview, that he’d spent a freezing Thursday night parked outside the Queens slaughterhouse, waiting for workers to arrive so he could haggle for the cow.

“My friend contacted me as soon as she saw the post on the NYPD Facebook page,” Stura told the Daily Dot. “I jumped in my truck and hooked up the trailer and started heading that way. I called the police first, and they told me where the place was.”

The slaughterhouse, said Stura, was typical of similar “live kill” businesses scattered all over New York City, where customers can go pick out an animal, have it’s throat slit right before their eyes, and take it home to cook and eat that night.

“The first person I spoke to at the slaughterhouse was quite receptive. But he told me the cow was brought in with a deposit, and it was for an occasion. He told me the family would not let the animal go,” said Stura.

But he wasn’t giving up. Stura, who rescued animals for years before finally building his own 240-acre farm animal sanctuary 11 months ago, said he could tell the small business owner was feeling pressured by the intense media presence and the public’s fascination with the escaped cow.

After about 12 hours in the cold, the negotiations were successful and Freddie the cow was nestled in his new forever home in New Jersey’s rolling farm hills. In the photo Stura posted, Freddie looked bewildered by the experience of the past day.

But Freddie is just one animal that got lucky.

“Tons of animals are coming in from farms to slaughterhouses in the city,” said Stura. “It usually happens under the cover of darkness, very early in the morning. While I was there this morning, a truck came and brought chickens.”

According to the Humane Society, three million farm animals were killed in 2015—including cows, sheep and lambs, pigs, and birds like chickens and turkeys.

Sanctuaries, like Skylands and upstate New York’s Woodstock Farm Animal Sanctuary, rescue hundreds of animals from slaughter. Those animals are often shipped out to any of the dozens of sanctuaries scattered across the U.S.

Stura has sent rescues to as far away as Texas and Canada when he didn’t have room for them himself. But now, with 240 acres, he’ll likely be taking on a lot more.

“It is full time, but it’s not a job,” said Stura, who operates the land with his wife. “My sanctuary has no full-time employees. I’m a truck driver and truck mechanic.”

All the donations that Skylands receives, Stura said, go towards food and medical care for the animals, farm equipment, and infrastructure. It can be expensive, but regardless, Stura said he never wants the sanctuary to be his own personal source of income: “I want to keep it pure.”

This morning, Freddie was off to the vet to get a checkup. But once his health is brought up to par, he’ll live a peaceful and happy life at Skylands. Surrounded by Stura’s 18 other rescued cows, and countless other farm animals, Freddie will eventually forget his terrifying slaughterhouse days and panicked run down crowded NYC sidewalks, and will munch on grass and cud with nothing but the whistle of grasshoppers and the crow of roosters as the soundtrack to his life.