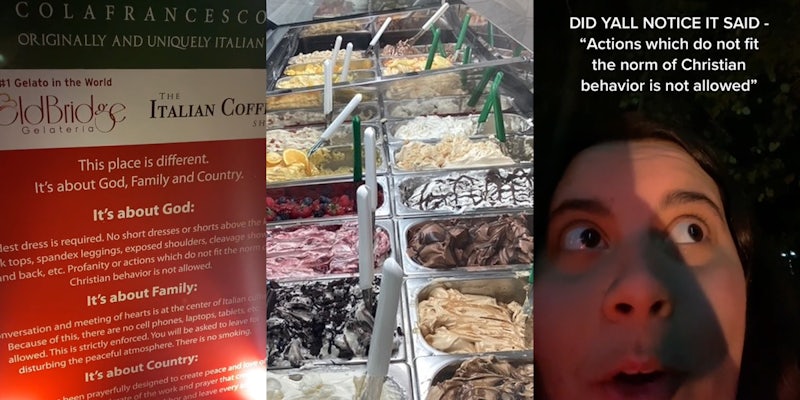 ‘This place needs to be shut down’: TikToker calls out Catholic gelato shop’s strict dress code and prohibition of phone use

'Actions which do not fit the norm of Christian behavior is not allowed.'

Villagio Colafrancesco Gelato, a gelato-coffee shop hybrid, has made a lasting impression on thousands of TikTok users after going viral for its business values. In a viral video, TikToker Madison Hair (@madison_hair) calls out the local Birmingham, Ala. business for its strict rules that must be followed inside the establishment.

“This place needs to be shut down,” Hair says.

At the beginning of the video, Hair shows the sign posted at the front of the business.

“This place is different,” the sign reads. “It’s about God, Family and Country.”

Villagio Colafrancesco states specific religious, tech, and clothing restrictions regarding each of their values. Under “God,” the sign states, “modest dress is required…profanity or actions which do not fit the norm of Christian behavior is not allowed.” Prohibited clothing includes anything that reveals too much cleavage, bare shoulders, leggings, and above-the-knee shorts and dresses.

The “Family” section states that the store restricts the usage of cell phones, tablets, laptops, and cigarettes in order to protect the Italian value of “the meeting of hearts.”

Under “Country,” the main message from the business is to be respectful of the location, which includes refraining from taking photos and “disturbing the peace.”

“We walk in this place. I didn’t read the sign,” Hair explains of her experience at the store. “We get in there to this little ice-cream-parlor-looking room and this guy who I’m assuming is the owner comes out, looks right at me, and I’m taking a picture of this beautiful gelato.

“You can’t have that [for] picture. Go put it in your car,” she claims the man told her. Hair, who was shocked, says she is interested to see how long the shop stays open “with these rules, in this world, and in the South.”

According to the company’s Facebook event page, the reason they have such strict rules is because of the culture of Italy.

“If you’ve ever traveled to Italy, not to the tourist traps, but to the hearts and homes of organic Italy, you will find that they have a culture of just ‘being present’ with each other at meal times,” the post said. “They sit around the table and talk for hours as if each night may be their last. It is one of the most impressive moments that leaves a mark on your heart. We have lost that in America, and we, at Villaggio Colafrancesco, desire to bring it back.”

In the comments section of Hair’s video, viewers shared their shock.

“Alabama is a hellscape,” another commented.

“There is no way they last in a city where there is basically an unwritten Lululemon dress code,” a third user said.

In a follow-up video, Hair clarifies why she felt so strongly about the business and its sign.

“My issue is not the dress code or the fact that they said don’t bring your phone in there,” she says. “My issue is the hypocrisy that is in that sign and the literal discrimination.”

Hair explained that as a Christian herself, “we are to love” and meet people where they are. So, she says the idea of basing a business on the “norm Christian behavior” is discriminatory. A human is a human, Hair says, and everyone deserves the same amount of respect despite any differing beliefs.

“Sounds like it’s just a business that’s run on control and you have to go by their version of Christian norm behavior/beliefs,” she says.

In the comments section, some users picked up on Hair’s point.

“With no phone, they’d anticipate you can’t have proof of altercations that may arise when kicking someone out,” one user said.

“People are people and everyone deserves love and respect. Completely agree with you. Thank you for speaking more on this!” another commented.

Some users did their own digging and found that Caritas of Birmingham, a Catholic group created by the owner of the gelato-coffee shop Terry Colafrancesco, has faced multiple allegations of cult-like behavior. According to the Cult Education Institute, several lawsuits have been filed against the group, and the Pope has not yet recognized the basis of the group’s beliefs as legitimate.