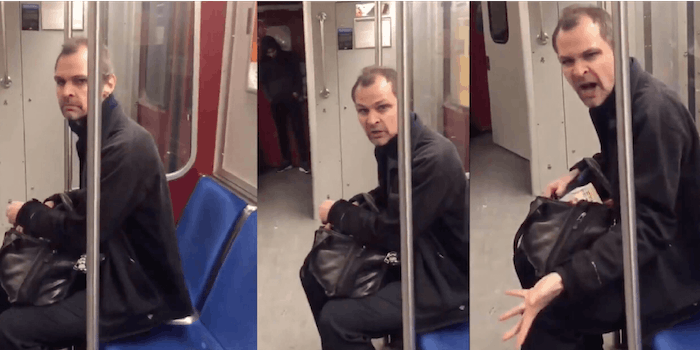 He verbally attacks her for her religious clothing.

A video shared by a Muslim woman in a niqab has gone viral, showing a white man verbally attacking her for her religious clothing and calling her “weird and bizarre” among other things.

According to the description attached to the videos, she said the man was staring her down and harassing two kids for speaking Spanish. When she tried to interject, this conversation ensued.

In a previous photo on her Instagram, the user appears to be wearing the niqab–an Islamic veil that covers one’s face except for the eyes–as well as the hijab, the headscarf. She is not seen in this specific video, but from the conversation it appears she was wearing both during the racist verbal attack. She did not respond to the Daily Dot’s request for comments.

The first video starts with the man, seated alone on the bench of a subway car, talking loudly at the person behind the camera.

After some back and forth, the man begins to tell her she should “go back” to her country.

“You came from a monolithic homogeneous society,” he said in the video. “Now that you’re in our society adapt to our norms and customs or you should leave. Go back to your country where you can practice your own norms and practices.”

Niqabae then points out that she was born in the country.

“It’s amazing you were born in this country and you have no guts to show your face,” he said.

He goes on to insinuate that she is covering her face because men in her society sexually assault women who don’t, an Islamophobic trope to often attack women who choose to cover themselves.

He goes on to list a few countries who have banned the niqab, such as France, Belgium and Germany.

There’s a cut in the video before the next scene, where the woman is then heard saying, “You want to strip me of my body autonomy.”

In a second video shared by the user, he is seen telling her it’s unacceptable to hide her face unless it’s for Halloween and that she should learn about Canadian “cultural tradition.”

And then, after staring at her a few seconds, he says unprompted, “Don’t come here expecting me to respect you….you’re weird and bizarre in my opinion.”

The videos have received a few hundred likes and retweets, but she is already facing responses that defend him for having “mental health” issues––an excuse often afforded to white men for being outright racists.

According to a screenshot of a conversation, another person who reportedly encountered this man before is seen saying, “he has always acted this way, and I’m pretty certain there’s some sort of mental health issue attached to his behavior.”

The person who responded identified themselves as Muslim and someone who fell victim to this man’s racism before, according to screenshots of the conversation.

The tweets generated a lot of conversation, with some saying the videos show racism in Canada.

Sidrah Ahmad-Chan, a researcher in Canada, shared the video as an example of “gendered Islamophobia.”

Ahmad-Chan’s research shows that Islamophobia affects women disproportionately precisely because of reasons as this incident highlights: more women are discriminated against for wearing their headscarf or veil.