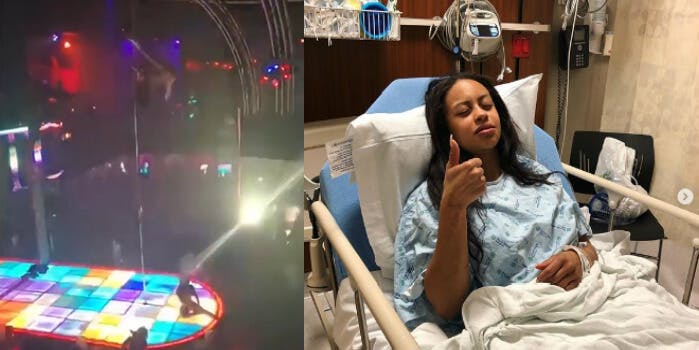 The woman suffered a fractured jaw. The strip club she works at is taking no responsibility for the fall.

A Texas stripper’s fall from a nearly two-story high pole has spurred a conversation about labor rights online.

Genea Sky was in the middle of performing a pole dancing trick at XTC Cabaret in Dallas when she fell. Someone in the audience recorded a now-viral video of the fall.

After crashing 15 feet and landing on the club’s colorful stage, Sky continued to dance.

From the video, it appeared the dancer was OK, but a recently uploaded and tearful update by Sky reveals she suffered some very serious injuries.

“I pretty much broke my jaw and I have to have surgery on it tomorrow,” Sky explains in between tears. “I broke some teeth and I got a sprained ankle.”

Sky expresses gratitude for the outpouring of support she’s received online and for surviving the fall.

“It’s just a really humbling experience to just be alive,” the dancer continues. “I’m just really thankful for that.”

Sky’s friend started a GoFundMe page to help the entertainer pay for her medical expenses. So far, the fundraiser has raised more than $33,000.

Even though Sky was showered in support (including by 50 Cent, who praised her for continuing her routine in spite of the fall), her employers chose to blame her for the accident.

Eric Langan, who is CEO of the company that owns the club, told TMZ that it takes no responsibility for the incident because Sky chose to perform that particular trick at her own risk.

In response to the incident, a conversation about labor rights erupted online, with many pointing out the unfair way that strippers are treated by employers. Many agreed that exotic dancers deserve worker’s rights, like any other laborer.

“This is exactly why they keep strippers as ‘independent contractors.’ So they don’t have to take accountability for anything that happens to us, including assault and injury. It’s to protect men, not the dancers. This is why labor rights are important,” Twitter user @thotscholar wrote in response to the TMZ article.

Another argued that even though strippers make quite a bit of money, they still need help paying for medical expenses if they are hurt on the job.

“Surgery and recovery is expensive and because this country doesn’t give strippers employee benefits like worker’s compensation, her $$ will be disrupted no matter how much she has saved. As would most average Americans,” author and history teacher Elexus Jionde explained.