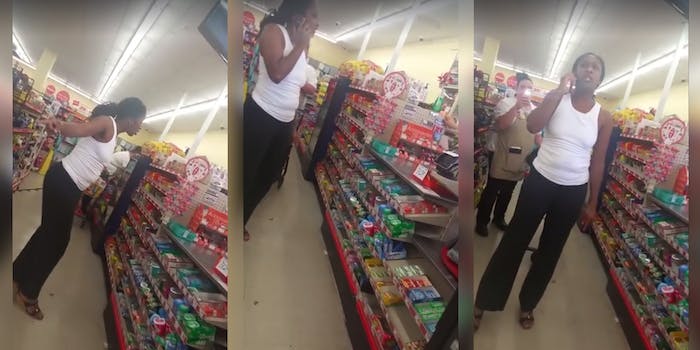 'If they have a moment’s trouble, this is the mama coming up in here.'

Ahh, there’s nothing like a good video of a woman telling off a racist grocery store clerk.

In the video, which has been viewed nearly 8 million times as of publishing, a woman enters a grocery store followed by what appear to be her teenage children—who are dressed in what she later describes as “African garments.” According to her accusations, the clerk asked her children if they were going “trick or treating”…in September, which was taken as a snide comment about their traditional clothing. Then she goes off.

The woman requests to speak to the manager of the store and for the clerk to apologize to her children. “You’re in a black neighborhood; you should have better diversified training than this,” she says. Later, she gets on the phone with the manager, saying her children have never given anyone trouble “and they better not get a moment’s trouble, and if they have a moment’s trouble, this is the mama coming up in here.”

So, consider this a PSA: People of different cultures sometimes dress differently, and making weird jokes about someone’s outfit is completely unnecessary, whether you meant to be racist or not.