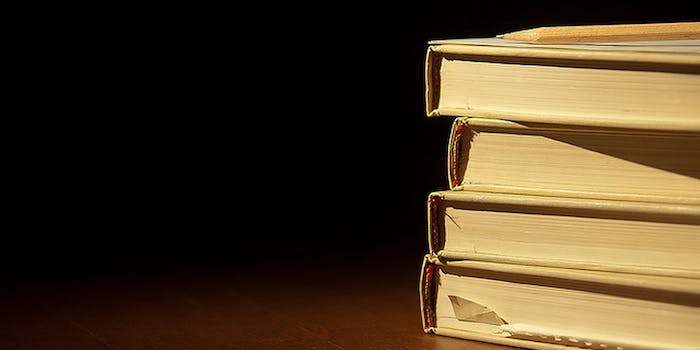 There are big moves forward in terms of byline equality—for some.

The 2013 VIDA: Women in Literary Arts Count, which explores gender disparity within literary publications, journals, and reviews by counting male and female bylines, was released today, and there are some big moves forward in terms of byline equality.

The VIDA Count’s findings once again take the shape of pie charts, and this year, The Paris Review’s overall findings are nearly equal. They show the most improved stats from 2012 to 2013. The New York Times Book Review is also approaching some semblance of parity. In terms of authors reviewed, it counted 332 female to 482 male; in terms of reviewers, it featured 393 female, 412 male, and one transgender person, something noted in no other publication in the count. It’s worth noting that Pamela Paul, the NYTBR’s editor, came on in 2013. Having a female editor can be key in opening up equality. 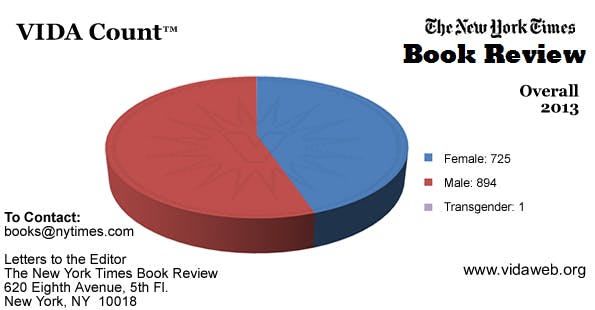 But there are still publications stuck in a holding pattern. The New York Review of Books featured 636 male bylines, and just 164 female. 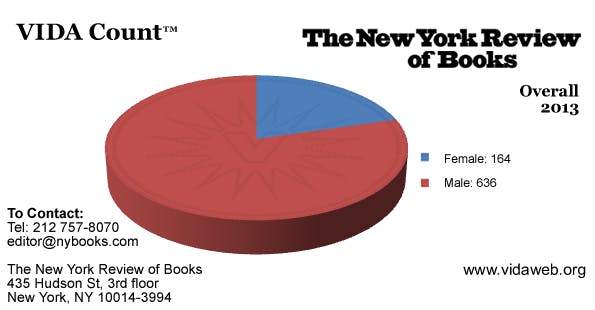 Just last year, the publication’s senior editor shrugged off VIDA’s criticisms of gender bias with a patronizing form letter. McSweeney’s bylines skew male by more than 75 percent, and The New Yorker and The New Republic continue to be male-dominated. There are many more 75 percenters, taking into account both authors and books reviewed, To quote VIDA’s blog:

“And I’ll just call this corner of the globe, ‘Dudeville,’ which is far more polite than what Urban Dictionary would dub any closed circle of men enjoying their ‘creative privileges.’ Drumroll for the 75%ers: The Atlantic, London Review of Books, New Republic, The Nation, New York Review of Books (actually holding steady at 80% men for four years) and New Yorker. We get it: you’re mighty, unmovable giants.” 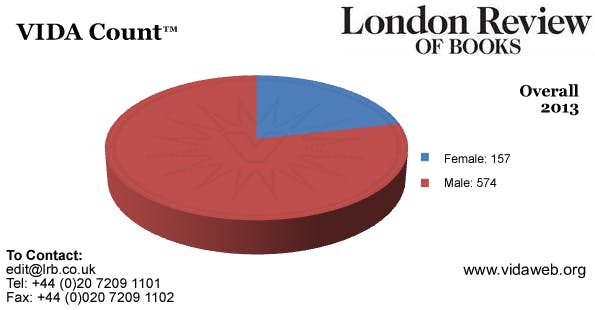 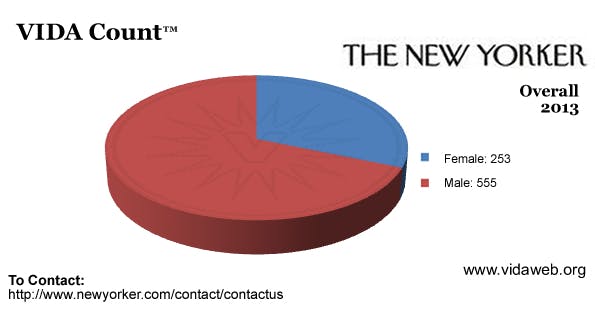 Last year, the blog Ladybusiness did its own count of sci-fi and fantasy lit bylines, and found the gender divide to be getting worse. While VIDA doesn’t get quite that niche, it seems women in fiction and poetry experienced an upswing this year.

This count is often controversial, and many critics, like the editor of The New York Review of Books, will see this statistical breakdown as petty. However, as discussions about income inequality open up, these shifts (or de-evolutions) are important to note. They are deeply tied to female writers and critics’ livelihoods. As stated in the blog intro, “it all starts with words:”

“So we are emboldened to carry on, asking questions, wondering aloud whose interests are disseminated and defended by those stalwart, outspoken editors and publishers who gloss over and even praise the myopic contents of their own male-dominated pages. We will continue to hold those pages to the fire.”