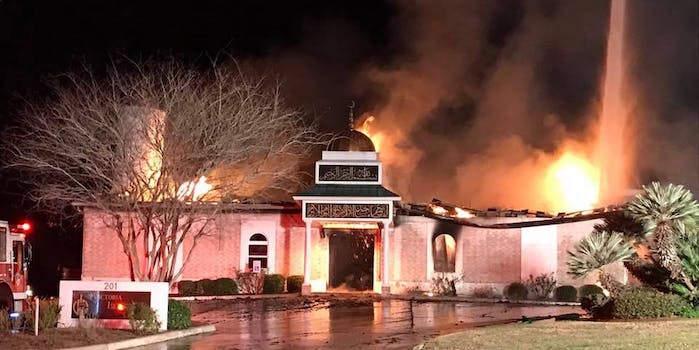 A GoFundMe account to rebuild the mosque has been established.

The night after Donald Trump signed an executive order banning citizens from seven Muslim nations from entering the U.S.—a ban that has already begun legal fights—a mosque in Texas was burned down early Saturday morning.

According to the Victoria Advocate, firefighters arrived at the Islamic Center of Victoria at about 2 a.m. Saturday with the building already engulfed in flames.

ABC 13 reported that nobody had been injured.

Fire Marshal Tom Legler said there were no theories for why the fire began, and even though he said the building was burglarized a week earlier, Shahid Hashmi, president of the center, didn’t want to speculate either.

About 20 members of the mosque participated in early morning prayer Saturday on the sidewalk across the street from their destroyed place of worship.

“They said it … is a restricted area for now for the investigation,” Hashmi told the newspaper. “So, we just prayed right here on this” sidewalk.

The center announced it would hold a public prayer service open to the community on Sunday morning.

A GoFundMe page also has been established to rebuild the mosque. As of this writing, more than $67,000 of the $450,000 goal has been raised.

Update 5pm CT, Feb. 8: Federal investigators have ruled the Islamic Center of Victoria fire arson, although they say the evidence does not point to a “hate crime.”