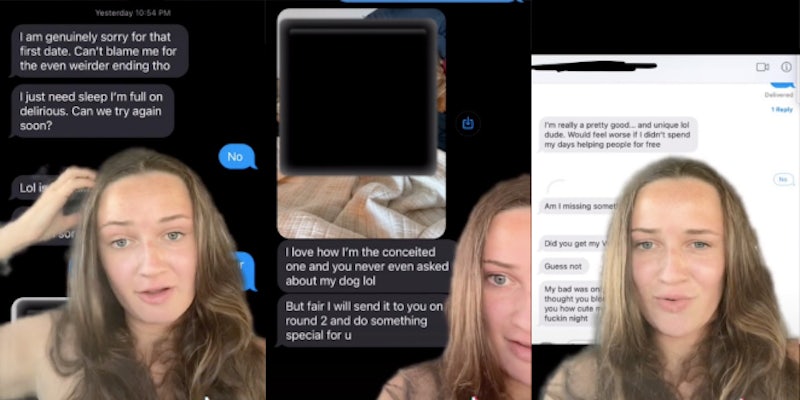 ‘I will not be a beta male’: Hinge date sends Venmo request for drinks after woman refuses to go home with him

'Sometimes I think I’m desperate and then I see men acting like this.'

A TikToker who had an awful first date is coughing up the receipts about the exchange that happened afterward—including a Venmo request.

Peyton (@peytonriddle) initially posted a video talking about how the date itself, which was organized via Hinge, went after the man she was meeting up with arrived 45 minutes late to the restaurant where he asked her to meet him.

It sounds like things only devolved further from there, with his attempts to “make things less weird.” She notes he actually only making things even more uncomfortable with prying questions, “inappropriate” stories related to him being in med school, and the baffling decision to call Peyton “poor” to her face after she told him about her car being broken into. The whole thing is best heard in her own words, as it truly sounds stranger than fiction.

Unsurprisingly, she wasn’t interested in taking things further, which allegedly prompted him to say: “I will not be a beta male. You will either come home with me or you’re going to pay for your drinks that I just bought you.”

Peyton says she sent him $40 via Venmo on the spot so that she would never have to see him again, but that wasn’t the end of the story.

Not only did he allegedly follow up with a Venmo request for an additional $20, but she says he also had the audacity to beg for another chance while continuing to insult her.

She shared the text messages as well as the subsequent Instagram messages after she blocked his number, which included the guy insisting he’s a “pretty good… and unique lol dude,” sending photos of his dog, and claiming he’s “not gonna press if you don’t see what’s special about me” while continuing to press for weeks all the same.

“Wanna hang tn I got off early,” reads one of the final messages, despite Peyton declining to respond to his previous messages and making it clear once again she didn’t want to see him a second time. “Yes or no don’t be a drama queen.”

“Alright you suck,” he concluded.

Viewers were thrown at the audacity.

“How do I develop the personality to text someone this many times without getting a response?” asked @lucacastile.

“Sometimes I think I’m desperate and then I see men acting like this,” @chickenshitty chimed in.

Several expressed concern about this dude eventually becoming a doctor and being around patients, while @bellamderiso joked “he obviously does have time for the drama.”

The saga seems to have ended back in July, but Peyton has hooked a slew of viewers should this Hinge date from hell decide to slide back into wherever he hasn’t been blocked yet.

The Daily Dot has reached out to Peyton via TikTok comment.