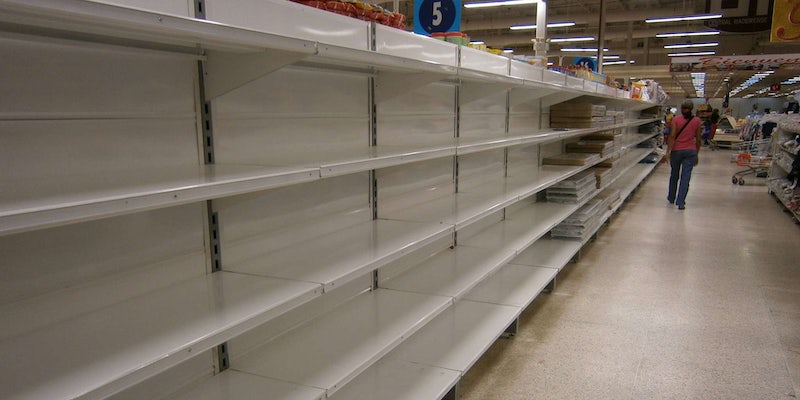 Venezuela may run out of beer next month

No free speech and no beer makes Venezuela something something.

Venezuela has suffered through a long clampdown on free speech, increasing political strife, and a deteriorating economy—with inflation at 615 percent. But now the unthinkable has come to pass: Venezuela is running out of beer.

How could something so requisite to life in the South American country happen?

For one thing, the beer company Polar produces 80 percent of the beer in Venezuela, and the brew workers union, Sintraterricentro, has gone on strike at two of the company’s major bottling plants. For another, there is a shortage of imported ingredients like hops. Finally, an economy that pinches people’s consumption of luxuries like medicine eventually cuts into necessities like a nicely chilled lager.

As this Venezuelan citizen says in Spanish: Without money and beer, the Venezuelan loses his head.

It’s a sentiment borrowed from The Simpsons.

Given the amount of beer on shelves and in warehouses, the country may exhaust its supply of beer by August, according to El Nacional.

To give you an idea of how serious this situation is, Venezuela’s ombudsman for human rights—human rights!—has stepped in to mediate the situation, according to GlobalPost.

There’s a reason for this. Beer in Venezuela is no joke. According to Euromonitor International, “Beer has high penetration in households at all income levels, and accounted for a total volume share of 93% in alcoholic drinks in 2014.”

The country is the eighth-highest consumer of suds not in Latin America (where it’s No. 1), but in the world, with an annual per capita of 88.5 liters. Glugmonster status. It’s this dedication to consumption that has made Polar the largest privately held company in the country.

Venezuelan president, Nicolas Maduro, following the lead of his mentor Hugo Chavez, has accused Polar, which is also the country’s largest food company, and which produces pasta and corn flour (staple ingredients of the country’s national food, the arepa), of creating artificial shortages. Chavez even threatened to nationalize them.

When the last beer flies off the last shelf, the Chavistas may get their wish.