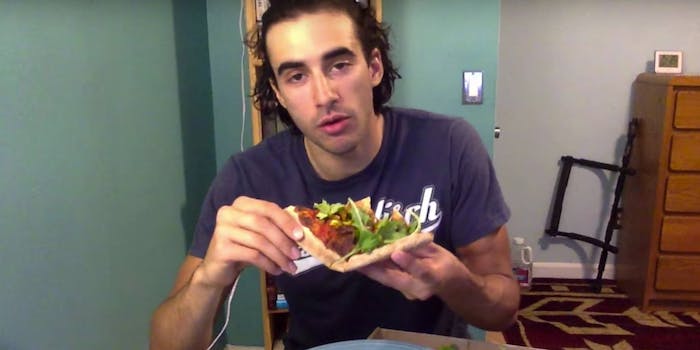 Is this video of a vegan eating cheese even real?

And if not, does that matter?

Picture this: You’re a staunch vegan who accidentally discovers you’ve eaten cheese. You’re pretty furious, and maybe embarrassed that you didn’t grill the pizza place harder on their ingredient list before you started eating. If this happened while a camera was running, would you upload it to YouTube?

This is the question I have surrounding YouTube user Powsimian’s Mukbang video, in which he eats what he believes to be a large vegan pizza while telling the story of how he became vegan. Powsimian is what could best be described as a professional vegan. His website promotes a high-carb, vegan diet, and he says he’s lost 50 pounds while on this diet. He’s got an audiobook, Instagram, Tumblr, and more all promoting his uber-vegan lifestyle.

In the middle of the video (about 16:04), Powsimian stops and inspects his pizza, pulling something out of the sauce and wiping it on his plate. The video then cuts to him on the phone, calling (presumably) the pizza place and asking what’s in the sauce. Then he throws his phone across the room and flips over the pizza box.

After another cut, and he enters the room, explaining that there was actually cheese in the sauce. Then he starts flossing on camera, which is really the most outlandish part of the entire thing.

The video was picked up on Reddit, and most people chose to complain about vegans and entitlement. But nobody asked just why Powsimian would upload a video like this. If he truly did not know the sauce had cheese in it, why was it edited throughout to seemingly exemplify how mad he was? He could have cut the whole tantrum and made a video explaining how often animal products are used in foods we don’t expect. Or, did he stage the whole thing? Did the sauce even have cheese in it? This goes all the way to the top.

I mean, of course he uploaded it for the pageviews, whether he faked it or not. In the two days since the video (which has over 723k views now) was uploaded, he’s uploaded 10 more videos, seven of which directly respond to the original video and the comments it’s gotten on YouTube and Reddit.

And so far, the subsequent videos have gotten a lot more traffic than his previous endeavors, including a video titled “How to Get Away With Rape,” in which he tries to humorously argue that animals are the perfect “voiceless victims,” and basically uses the language of rape to talk about why eating animal products is the worst thing you could possibly do with your life. It’s delightful.

The Daily Dot has reached out to Powsimian for more insight as to why he would upload that video if the cheese in the sauce was indeed a surprise to him—though people uploading unflattering videos of themselves to YouTube is hardly uncommon. At any rate, he’s been getting a lot of sympathy from his followers on Tumblr, and admits to enjoying the exposure.

Ultimately, the issue isn’t whether Powsimian faked the video or not, though in my opinion he totally did. It’s that we continue to want to be entertained by (what appears to be) spontaneous emotion, even if we suspect on some level it’s been manufactured. From Hunter falling down to Chewbacca mom to any reality TV show, we seek out the genuine and unplanned, a reaction that feels real.

Maybe Powsimian really did accidentally eat cheese, and realized he could use that moment to propel him into greater visibility and teach us all a lesson about how hard it is to be vegan. Maybe he wanted to teach that lesson anyway, so he staged the whole thing. Maybe everything he does is fake. We don’t know and we can’t know. And maybe that’s why we keep watching.