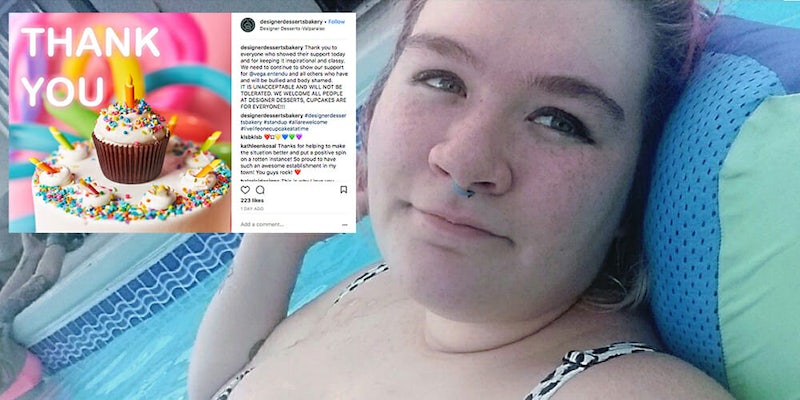 An Indiana woman who was body shamed as she tried to buy cupcakes is getting sweet revenge—in cupcake form.

Vega Blossom was in line with the intent to buy six cupcakes at local bakery Designer Desserts-Valparaiso on Saturday, according to the Huffington Post. The line was taking a long time, and a woman waiting behind her was growing impatient.

When Blossom was finally up to order, she says she heard the woman say, “Thank god, now lets hope this fat bitch doesn’t buy all the cupcakes.”

“As soon as I heard that I BOUGHT EVERY DAMN CUPCAKE,” Blossom wrote on Facebook. “I SPENT $54 ON CUPCAKES JUST TO BE A BITCH. HAPPY EASTER.”

Her original post garnered more than 78,000 reactions, drawing support from strangers—and the bakery, which has since delivered two boxes of cupcakes to Blossom at her work.

“Designer Desserts-Valparaiso is a BULLY FREE ZONE and WILL NOT TOLERATE these disgusting types of attitudes,” Wiltfang wrote on Facebook. “Didn’t your parents ever teach you, ‘If you have nothing nice to say, don’t say anything at all’ Keep your mouth shut and snide remarks to yourself.”

Thank you to everyone who showed their support today and for keeping it inspirational and classy. We need to continue to show our support for @vega.entendu and all others who have and will be bullied and body shamed. IT IS UNACCEPTABLE AND WILL NOT BE TOLERATED. WE WELCOME ALL PEOPLE AT DESIGNER DESSERTS, CUPCAKES ARE FOR EVERYONE!!!

A post shared by Designer Desserts Bakery (@designerdessertsbakery) on Apr 4, 2018 at 4:16pm PDT

Unfortunately, Blossom has had other fat-shaming bullies come after her on social media, but she’s taking it all in stride. Best of all, she’s getting plenty of cupcakes—and eating them, too.