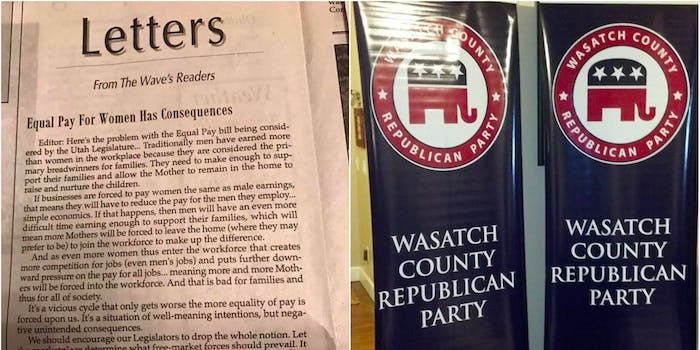 'Mothers will be forced to leave the home (where they may prefer to be).'

Earlier this week, James Green, vice chair of the Wasatch County GOP in Utah, wrote a letter to the editor, published in two local papers, against a bill that would study pay discrepancies among men and women and hold employers accountable for establishing equal pay criteria.

Green’s arguments, however, appear to have arrived via a 1917 time capsule that took into consideration zero women’s opinions or their differing financial situations.

It begins by saying that men need to be paid more because it allows “the Mother to remain in the home to raise and nurture the children.” He goes on to make the correlation that paying women more means paying men less, not just, you know, paying women more. And if men get paid less, it means even more Mothers (uh huh, cap M) will be “forced to leave the home (where they may prefer to be),” perpetuating an evil cycle of men having to compete for jobs and Mothers not doing solely Motherly things. All of which is bad for society.

When the letter hit the internet, people, naturally, were like, “hoo boy.”

Misogyny is alive and well in Utah, check out this Op-Ed from @WasatchGOP Vice Chair James Green in the @Parkrecord #equalpay #smh pic.twitter.com/1oNvTYY2QX

Everyone please take a moment to write or call Mr James Green. Explain that it is 2017 and not 1817. So angry Utah!!! pic.twitter.com/ojIvWzJoZI

.@billyeichner wow as a single woman who lives & works in Utah, I had no idea that by receiving equal pay I was destroying families! Sorry!!

So today, Green wrote a sort-of apology. “There was no offense intended toward Women, whatsoever,” he said. “And yet some took it that way. To those who were offended, I profusely apologize. I sincerely did not mean to do that.”

He went to say that “Women’s contributions in the workplace are just as valuable,” before mentioning that he worked “his fingers to the bone,” so his Wife could stay home and raise his two Sons (caps for everyone defined by him!), who became “Physician/Surgeons (plus one also has a Law Degree).”

Thanks for clarifying, Man.