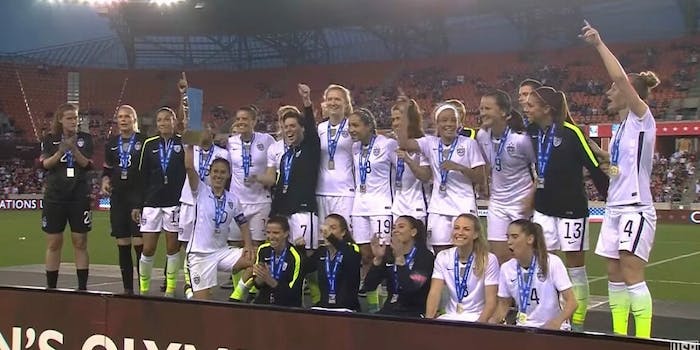 It's an 'equitable' step forward.

In a battle that’s been waging for nearly two years, the U.S. Women’s National Soccer Team scored a momentous goal Wednesday when it signed a new five-year collective bargaining agreement with U.S. Soccer that will give the players a large increase in base and bonus pay.

But the biggest desire for the U.S. Women’s National Team (USWNT)—to be paid equally to the men’s team—was not reached. The women, however, did gain new licensing and marketing rights, which should increase their earning power and their potential to negotiate even better deals in the future. As CNN points outs, the USWNT will also get the same per diem payments as its male counterparts (and will get reimbursed for unequal per diems for the past two years) and improved travel accommodations.

“We tried to completely change the methodology for how to define our value, and we made progress in that regard, and it changes the equation for the future,” said Becca Roux, the union’s executive director, via the Times.

The USWNT has long been one of the world’s most dominant squads, but compared to the U.S. Men’s Soccer Team (USMNT), its pay was vastly uneven. After winning the 2015 World Cup and playing in the most-watched soccer game (male or female) in American history, the USWNT was paid a total of $2 million. Compare that to the fact that the men were paid a total of $8 million for losing in the first knockout round of the 2014 World Cup.

With the new agreement, though, U.S. Soccer President Sunil Gulati said progress was being made.

Though the USWNT’s union negotiations with U.S. Soccer was initially soured by the union’s tough stance and demands to be paid the same as the men, the USWNT made a tonal shift during the past few months, as more of the players got involved and instead of “equal” pay, they asked for “equitable and fair” pay.

By asking for equitable pay, as Becky Sauerbrunn explained to the Planet Futbol podcast, the women get paid by U.S. Soccer for playing on their professional club teams. The men’s players, however, are not paid in the same way, so there is a fundamental difference in how the men and women receive their compensation.

“Equal isn’t the right word,”Sauerbrunn said. “It would be equitable, because we are asking for a different structure.”

“I am incredibly proud of this team and the commitment we have shown through this entire process,” USWNT star Megan Rapinoe, who was one of five players to file a wage discrimination complaint against the Equal Employment Opportunity Commission last year, said in a statement. “While I think there is still much progress to be made for us and for women more broadly, I think the (USWNT) should be very proud of this deal and feel empowered moving forward.”