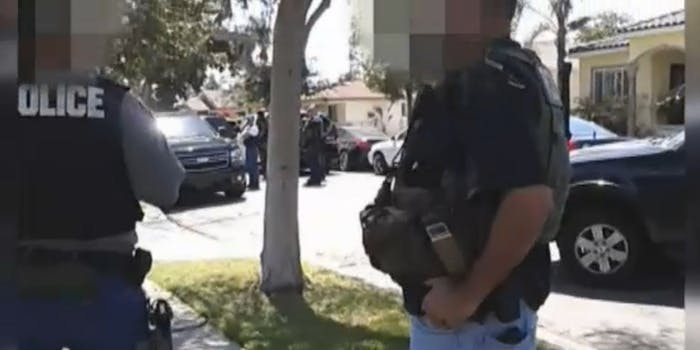 Screengrab via Photography is Not a Crime/YouTube

Here’s what happened before this U.S. marshal smashed that woman’s phone

A U.S. Marshal may have ruined California resident Beatriz Paez’s cellphone when he kicked it after smashing it on the sidewalk, but the video she was recording is still intact.

A separate video of the same incident captured by a bystander went viral earlier this week and is now the focus of an investigation by both the U.S. Marshals Service and the Los Angeles County Sheriff’s Department.

Paez took out her phone and began filming the arrest of several men in a South Gate neighborhood last Sunday. At the same time, an onlooker began filming as two federal agents approached her. In that video, Paez is seen yelling “I have a right to be here” and “You’re making me feel unsafe.”

When a third officer approached Paez, she began backing away. The officer then dashed toward her and grabbed the phone from her hand before throwing it to the ground and kicking it down the sidewalk.

Editor’s note: The YouTube video below contains a misleading title.

The salvaged footage from the busted camera was released on Wednesday evening to NBC Los Angeles. In it, one of the officers is heard telling Paez to leave the area. “You’re in the way of our investigation,” he says. She argues back, “I’m not in the way. I am in a safe spot. You can’t push me back. I need to film and I have a right to film.”

Another officer tells Paez to go across the street and film. “This is unsafe right now, you’re right in the line of the fire.”

The two officers then stood in front of her, blocking her view of the arrests. Paez was “half a football field away” from the scene, according to NBC, but appears closer because her camera was zoomed in.

Paez, who is planning a civil rights lawsuit, told reporters she was recording the arrests because she’s “close friends with families of people who have died at the hands of police.”