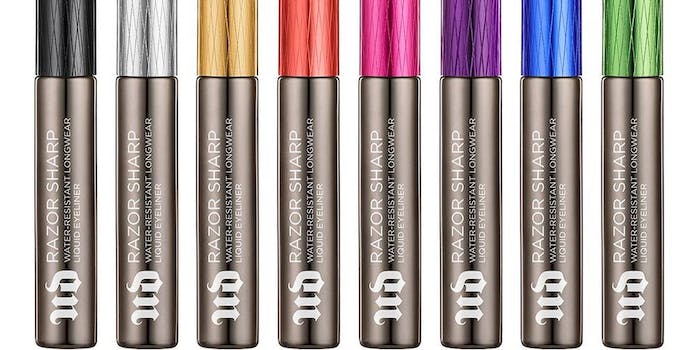 The makeup company says it didn't 'intend' for it to look that way.

Warning: These images could trigger cutting and self-harm.

Makeup brand Urban Decay has always had an edgy style. Its makeup has names like “Naked,” “Perversion,” and “Vice.” It has lipstick that’s shaped like bullets. But many are saying its tweet about eyeliner is making light of self-harm. 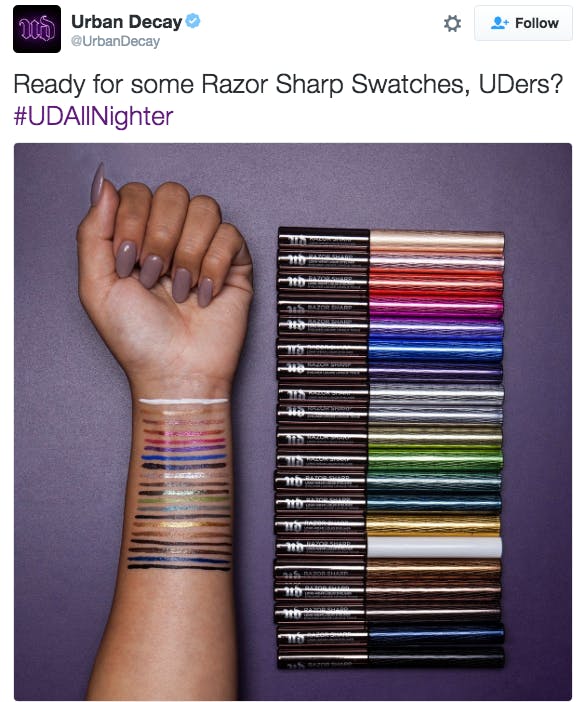 The tweet promotes its “Razor Sharp” liquid eyeliner, and presents a model with lines of each color running horizontally across her forearm. The tweet reads, “Ready for some Razor Sharp Swatches, UDers?” in reference to the name of the product. Presenting color swatches on a forearm is common practice in the makeup world, but the combination of the thin lines and the use of “razor” has many accusing the company of making a reference to cutting.

The Daily Dot has reached out to Urban Decay about the tweet but has not heard back as of publishing. For now, the tweet remains up, and supporters are saying that the company is just presenting the eyeliner as they would present any other product.

However, context matters. A wide swipe of lipstick across a forearm doesn’t evoke images of cutting the way a thin line of eyeliner does, especially when paired with the word “razor.” A 2012 study says between 12 and 23 percent of teenagers have engaged in “non-suicidal self-injury,” including cutting, so it’s likely that many of Urban Decay’s customers are familiar with the practice. I could be a triggering image, even if it wasn’t the company’s intention.

Update 2:21pm, CT, Aug. 24: Urban Decay has not apologized, but rather tweeted an explanation of the image, saying the inner arm is where they usually demonstrate makeup swatches. They also say they didn’t intend to reference self harm.

We swatch on the inner arm to show texture & shades. We didn’t intend to reference self-harm as the product is named Razor Sharp Eyeliner.

Editor’s Note: The headline and summary have been changed to reflect the update.