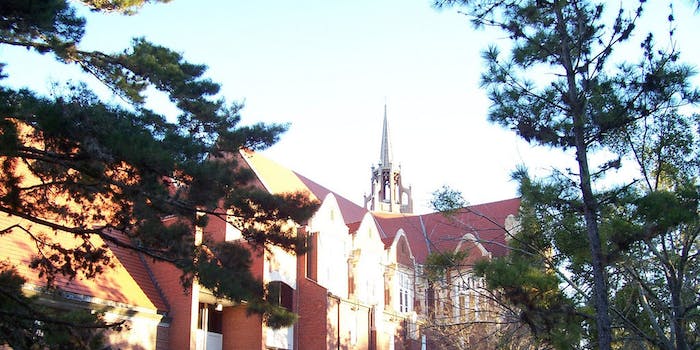 It doesn't look good for the gentlemen of Zeta Beta Tau.

Three students from the University of Florida‘s chapter of the Zeta Beta Tau fraternity have been kicked out following a Friday-night clash with disabled veterans that led to the students allegedly spitting on a service dog, stealing veteran’s flags, throwing beer bottles off a balcony, picking fights, denying the veterans entry to elevators, and urinating on an American flag.

This incident occurred during the fraternity’s spring formal at the Laketown Wharf Resort in Panama City Beach, Fla, and it reportedly also involved members of Zeta Beta Tau’s Emory University chapter. The formal shared lodging with the Warrior Beach Retreat, an annual event that offers “rest and relaxation” to about 60 wounded veterans who saw combat in Iraq and Afghanistan. The event’s mission aims to radiate “a feeling that their sacrifice was not in vain.”

The accused students were evicted from the resort, and no police report was filed. However, a privately shared Facebook post from Marlene East, from military wife Haley Riley, who attended the retreat with her husband, pushed the story into the national spotlight days later.

The fraternity has suspended all operations at UF and Emory as a result of the allegations. This has failed to suspend the outrage many feel over the incident and Greek campus culture.

Oh whadaya know? Another frat incident. But they do good things too, right?! #zetabetatau

The Zeta Beta Tau fraternity has gotten in trouble previously during this school year, with members already on probation for hazing. Said Laurence Bolotin, Executive Director of Zeta Beta Tau International, via public apology on Friday:

University of Florida President Kent Fuchs has personally apologized via email to Linda Cope, the Warrior Beach Retreat’s founder, and likewise promised a full investigation: “The incidents and behavior you and others have described (in letters and phone calls) and the offense to the wounded warriors and other guests are unacceptable.”