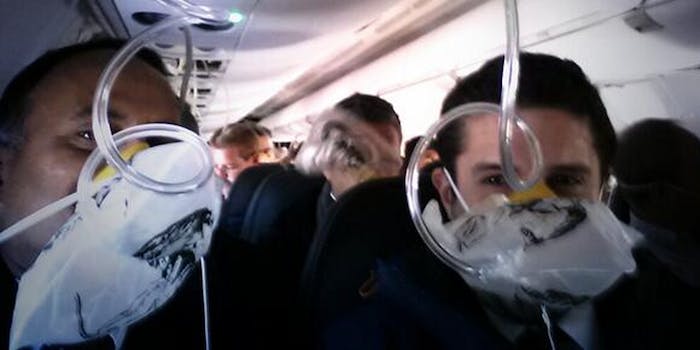 What would you do if you were on a plane and saw smoke coming out of the cabin? Probably not what he did.

What would you do if you were on a plane and the captain announced it was making an emergency landing? Would you cry? Scream? Call your loved ones? Pull a Cousin Walter from Mallrats? Or would you calmly take a selfie and livetweet the whole incident, as Georgetown University adjunct professor and marketing/social media expert Shashi Bellamkonda did?

Bellamkonda was on a United flight from Washington D.C. to Boston yesterday morning when smoke started coming out of the cabin’s vents. Rather than start shrieking and soiling himself, as I and others would have done, Bellamkonda snapped a selfie when the oxygen masks dropped and began to narrate the whole ordeal.

We took this selfie on flight UA3759 from Washington Dulles to Boston with @kevinfawley safe emergency landing pic.twitter.com/zKwFSdpGZd

Trouble started when the captain announced over the intercom that they would need to make an emergency landing because air pressure had dropped. Despite the dire circumstances, Bellamkonda said, the atmosphere in the cabin remained calm before the plane ultimately landed at a small airport in Wilmington, Delaware.

They then had to wait in the cold and then at the terminal for a few hours, until another plane arrived to take them to Boston.

We made an emergency landing in Wilmington de @myfoxdc @WNEW iad to boston United 3759 pic.twitter.com/5VoSgYD5fM

@united 3759 we made an emergency landing in Wilmington DE and yet to see a @united rep pic.twitter.com/JHy63BhjRg

Please come and tell us what’s next @united it’s been 40 minutes since we made an emergency landing pic.twitter.com/8CTnmFZ7sP

Despite the harrowing ordeal and the long wait time between planes, Bellamkonda says he’s grateful to the United pilot for keeping a cool head and landing the plane safely, as well as the airline’s reps, who sent the 58 passengers free pizza while they were waiting in the terminal.

My Flickr Stream: Here is pizza courtesy @flywilmg for stranded #ua3759 passengers. Thank you for your hos… https://t.co/7I1dvcGVj3 #li

But by far the most impressive player in this story is Bellamkonda himself, who handled an extremely high-pressure situation with dignity and flair. These are exactly the kinds of qualities we want in a world leader. Let’s all cast our votes for Shashi Bellamkonda, the Airplane Selfie King, in 2016.