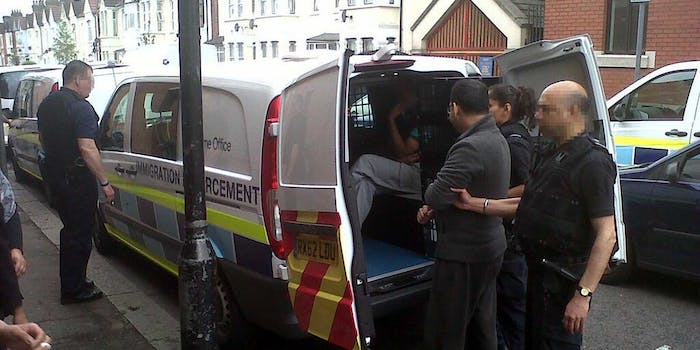 It's not a parody. The U.K. Home Office actually tweeted a photo of police rounding people up.

While online news junkies were glued to Wendy Davis’ pro-choice filibuster and the exploits of fugitive Edward Snowden, the British government was doing its best to emulate the dystopian nightmare of movies like Children of Men.

Before we say anything else, we feel the need to warn you that this is, in fact, a real tweet, from a verified U.K. government account:

There will be no hiding place for illegal immigrants with the new #ImmigrationBill pic.twitter.com/HH2JGDKnRq

Yes, while publicising its new immigration bill, the U.K. Home Office decided to post a twitpic of police rounding people into a van.

At first glance, this looks like a tweet from one of the many parody accounts that have sprung up in response to the U.K.’s brutal new austerity measures. For example, there doesn’t seem to be a huge gap between the verified @UKHomeOffice and the strictly fictional @UKJCP (“Job Centre Plus”, the official service for U.K. job-seekers):

If you see somebody dying in the street, be sure to check their ID and if they can speak English before dialing 999. Thank you.

In a way, there’s something oddly refreshing about the @UKHomeOffice Twitter feed. Unlike some political accounts, it makes no attempt to get down with The Youth, or even to engage with social media outside of lackluster hashtags like #ImmigrationBill. Its tweets on last week’s Glastonbury music festival mostly consisted of pictures of a mobile drug lab whose job was to track down new “legal highs”.

Did you know that 1 in 5 ‘legal highs’ sold on the internet contains an illegal drug? #glastonbury

However, while it’s understandable for @UKHomeOffice to be a little uncool, few of its 90,000 followers expected to see it cheerfully posting a Twitpic of people being arrested.

.@ukhomeoffice you’d fit right in in Germany circa 1936

.@ukhomeoffice The long and noble tradition of making humans live in fear of “the knock on the door”.

As one of the more polite commenters put it, “You might want to consider how you’re approaching this whole social media thing.”