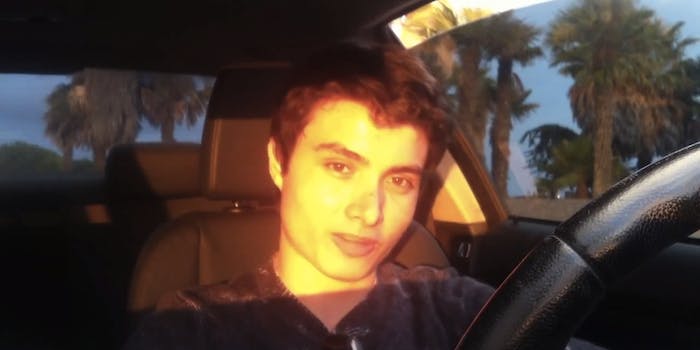 A pointed take on #NotAllMen.

In the aftermath of the shooting rampage that killed seven people near UC Santa Barbara last Friday, it was reported that Elliot Rodger, the 22- year-old suspect in the mass killing, was a frequent poster on online “men’s rights” forums. He had also left behind a 141 page manifesto detailing his feelings of bitterness, loneliness, and hatred for women, as well as his fantasy of interning all women in concentration camps and slowly starving them to death.

While some men on the Internet expressed sympathy for Rodger, or attempted to deflect the conversation surrounding the shooting by blaming his actions on the lack of adequate health care resources or lax gun control laws, many women on Twitter saw the shooting as symptomatic of the larger cultural problem of violence against women, and the way society teaches men like Rodger to feel entitled to women’s bodies. The conversation spawned #YesAllWomen, a twist on the male-led #NotAllMen hashtag that circulated last year in response to feminist complaints of sexism:

Because they harass you, then lie about you, then stalk you, then threaten you, then say: “But why won’t you talk to me? #YesAllWomen

Because somehow people still use the word ‘feminist’ as an insult, as if asking for equal respect is a disgusting idea. #yesallwomen

Because the same “harmless” misogynist rhetoric that fills up my inbox every day also fills a mass murderer’s manifesto. #YesAllWomen

#YesAllWomen because if or when we are brave enough to share traumatic experiences, we are accused of lying or attention-seeking

#YesAllWomen applies to this woman, remembering my ex with raised fist telling me how much I deserved to get punched in the face.

Because the friendzone is the fictional exile of the entitled. “Sexual partner” is not a woman’s default mode. #yesallwomen

#YesAllWomen because I once let a drunk guy walk me home because my ex was following me and I figured I had to choose the lesser threat.

Because every single woman I know has a story about a man feeling entitled to access to her body. Every. Single. One. #YesAllWomen

Sadly, but perhaps unsurprisingly, a handful of men on Twitter apparently felt their gender was under attack after #YesAllWomen started trending on Saturday. Some felt compelled to defend themselves by hijacking the hashtag, tweeting #NotAllMen in response:

I’m sure the whole point of #NotAllMen is that those of us with common sense don’t appreciate being lumped in with the rotten apples.

I don’t get this #NotAllMen thing. Did any reasonable person say that it *was* all men?

I’m going to troll #YesAllWomen because #NotAllMen are pieces of shit. In fact women do shitty shady things as well

You don’t get to shun me for my physical disabilities and then expect me to empathise with you now ladies. #NotAllMen owe you that courtesy.

Yet feminists on Twitter were quick to shut them down:

Sorry, dudes. You don’t earn #feminist points for not raping or killing anyone. Step up or shut up. Or just shut up. #YesAllWomen #NotAllMen