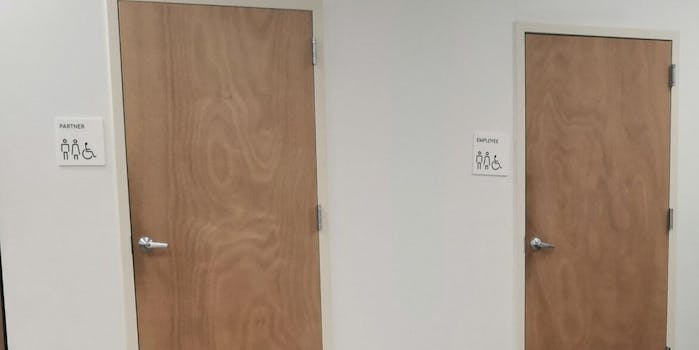 Uber said the bathroom signs were a 'mistake.'

A woman who says she’s a former Uber driver claims at least one office for the ride-hailing company designated separate bathrooms for employees and drivers.

“Anyone else think it’s strange that Uber views partners & employees as two separate classes of people?” Betts wrote. In a follow-up tweet, she identified the location as an office in Providence, Rhode Island.

The @Uber hub in my market has designated bathrooms. Not for male/female, but for partner & employee.
Anyone else think it's strange that Uber views partners & employees as two separate classes of people? pic.twitter.com/3SGeKSae3g

Andrew Macdonald, the senior vice president for Uber’s global operations, responded to the tweet and said the signs will be removed.

“This is not our policy and it’s absolutely unacceptable,” he said.

Pressed in tweets about why the signs were allowed to go up and stay on, Macdonald also said one of the bathrooms was initially a storage unit.

“But that’s not an excuse,” he said. “I don’t believe this is the case anywhere else (and it’s certainly not our design policy) but we’re doing a full review now.”

In a statement to the Daily Dot, an Uber spokesperson admitted the bathroom signs were a misstep.

“This was a mistake and we regret it,” Uber’s statement said. “We are removing the signs and have made it clear that this was not appropriate.”

According to Betts’ tweets, she was at the Uber office to dispute her “termination.” Betts, who did not immediately respond to the Daily Dot’s request for comments, said she was banned from driving for Uber after a passenger made a fraudulent charge against her.

On Twitter, people expressed dismay at what they saw as a display of classism in the workplace and further proof of poor treatment of contractors.

somehow I can see Uber making the argument in court: "they're not employees!! we don't even let them use the same bathrooms as us"

With the contempt @Uber and @Lyft have shown for their "Partners" in the past, I'm surprised they didn't just have a "porta potty out back" for the drivers.

Who says employees are always so clean?

People are people and dirty people are just dirty. Its not exclusive to profession.

If you don't own equity you're not a partner. Should say PEASANTS /EMPLOYEES

Vice reports that Uber, alongside other gig economy employers, has been accused of denying its drivers employee status to evade taxes and maintain low labor costs.