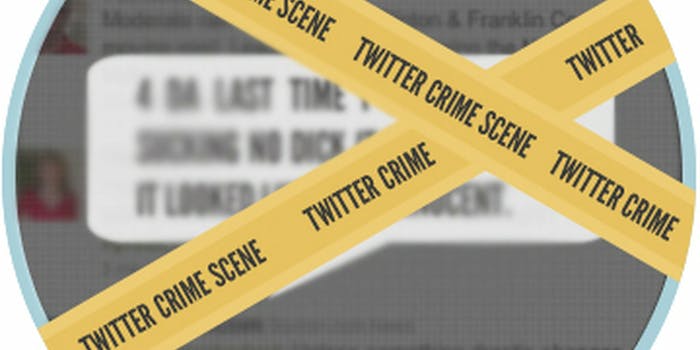 Old rules protecting the identities of minors and sex-crime victims are next to impossible to enforce online.

In an era of decentralized news, are we all complicit in crimes against reputation?

For the second straight day, the name of a 14-year-old who may be the victim of a sex crime has become a top trending topic on Twitter. Her reappearance comes after a second video commenting on the teenager’s situation spread wildly.

The first video features the 14-year-old girl appearing to perform a sex act on a boy—an act which in many jurisdictions could lead to criminal charges. That spawned three Twitter hashtags Monday—and other videos from complete strangers commenting on what they saw.

(Editor’s note: The Daily Dot has not published the girl’s name because she is a minor and may have been the victim of a sexual assault. Most media outlets do not publish the names of sex-crime victims. While it may seem absurd given the prevalence of the victim’s name, we’re not linking to the videos or the tweets in question, in an effort to spare her further attention.)

In one YouTube video posted late Monday, a YouTube user begs the world to leave the girl alone.  It is unclear whether the video is a joke—calls to “leave ____ alone” have become a popular meme since Chris Crocker’s plea to stop criticizing pop star Britney Spears—or a serious suggestion.

Regardless, it’s brought the girl’s name back to the top of Twitter’s trending charts.

That video—which, again, we’re not linking to—has been seen more than 234,000 times and collected more than 5,000 comments since being posted Monday afternoon. Over the last 24 hours the name of the 14-year-old has been mentioned more than 5,000 times, according to statistics from Topsy, a social media search engine. On Facebook, more than 14,000 people have liked a page dedicated to supporting the teenager.

“Sweetheart we all make mistakes and we all still making them everyday,” wrote one woman on the Facebook page. “I know this is a hard time but this is a time for you to grow closer to GOD because he don’t judge you and he will always be there even when people are not there for you.”

The victim’s name only appears in a handful of lesser-known blogs in Google News. But while most news organizations don’t disseminate the name of victims, the hordes of people on Twitter, Facebook, and Tumblr do not abide by these principles, said Colette Vogele, the president of Without My Consent, a nonprofit organization that fights against online invasions of privacy.

“This is a pretty tragic situation,” Colette said. “There is a difficult line between what the First Amendment allows and privacy interests, especially with the Internet.”

At the Web 2.0 Summit in San Francisco this week, Twitter CEO Dick Costolo identified his company as “the free speech wing of the free speech party.”

In August, however, Costolo tweeted that he’d like the company to edit out “clearly offensive” items from its featured topics, which are normally selected by an algorithm. Update: Twitter communications chief Sean Garrett said in a tweet that “there has been no change in policy.”

Early this morning, the teenager was one of the top three trending topics in the U.S. After the Daily Dot reached out to Twitter for a comment today at about 11:30 a.m., the trending topic disappeared from its homepage. Twitter has not responded to the Daily Dot’s request for further comment.

On Monday, a Twitter representative said the company was “monitoring reports related to this case and will apply our policy on child pornography.”

While Twitter and the law is very clear regarding pornographic content involving minors, the dissemination of the name of a minor who may have been a victim of sexual assault falls into a perilous gray area, Colette said.

“You can’t, in this country at least, stop people from speaking about factual information that is truthful or providing opinions about it,” Colette said. “Twitter is a business and it’s trying to sell and monetize what it offers. And so, I don’t think it has a big vested interest in taking aggressive steps to assist individual people. They will do the minimum they need to do, I’m sure. …I don’t know if there if there’s anything they should do. This is more a problem with society that’s obsessed with this kind of content.”