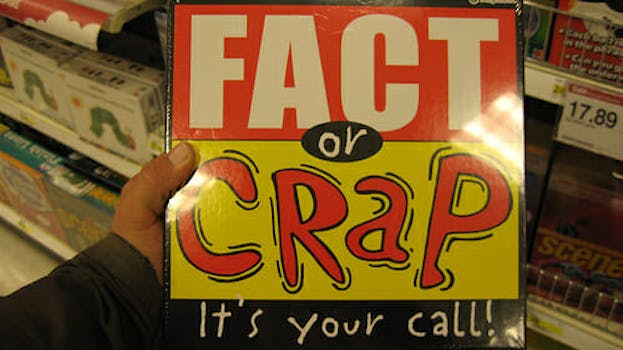 Fact or farce: A guide to verifying tweets

Follow these quick and easy steps to tell the difference between hard news and humor on Twitter .

Twitter breaks stories faster than any other medium. The recent deaths of Muammar Gaddafi and Steve Jobs only reiterated that.

But it seems that for every piece of hard news, there are 10 instances of Twitterers passing on straight-up lies. Here are a couple tips for tracing back a rumor.

First, beware of the “soft retweet.” That’s when someone simply types “RT,” followed by the username and text of the person they’re supposedly quoting. Someone could simply type whatever they want and claim they’re quoting their source. Comedian Rob Delaney has illustrated this with a recurring bit where he “retweets” @BarackObama, the president’s official account.

This is obviously easy to check. Just click the name of the news organization or influential person being quoted. If it’s breaking news, then it’s something that person would have said recently.

Secondly, know that a “strong retweet,” where an entire tweet appears in a user’s timeline, can be faked using a false account. That too is easy to suss out. An account falsely purporting to be CNN, for instance, won’t last long before being taken down by Twitter. To be sure you’re not being fooled by a freshly minted account, check how many followers that account has: A new dummy account will have a few hundred at most. (Those blue verified badges with a white check mark should help clear matters up as well.)

There’s always the looming threat, however, that major Twitter accounts can be compromised. In July, @foxnewspolitics was hacked, reporting “@BarackObama shot twice at a Ross’ restaurant in Iowa while campaigning. RIP Obama, best regards to the Obama family.”

If you want to take further precaution, corroborate the news with a second major news source. Another verified Twitter news account will do, and trust that if it’s a major story every network will be clamoring to report it.

But what about a suspect soft re-tweet of news that wouldn’t be covered by major outlets? It’s important to be skeptical if you see actual news in such cases, and you likely won’t get complete verification, but it’s not hard to refine your judgment. The best way is to see who first wrote the tweet is with the website Topsy.

Topsy’s a search engine for social media that can be used to search Twitter’s massive database of tweets, and it’s much more thorough than using Twitter’s search function or even Google’s. Enter some keywords from your breaking story, refine your search to tweets, and search by date.

Unfortunately, Topsy  only orders search results to be organized by most recent tweet, so you’ll have to scroll back, possibly for a while, to see the first few times a tweet appeared. Those on your last page may be slightly out of order, but based on those users’ respective profiles, you can make a judgement call about who tweeted first.

From there it’s up to you to judge how trustworthy that source is, but at least you’ll know where it came from.