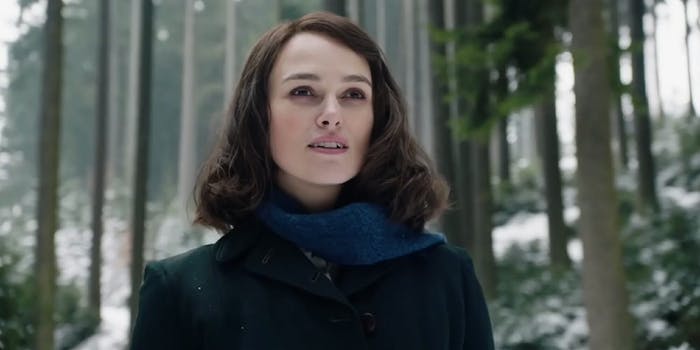 No, you can't just 'tell' someone is trans by looking at them.

Men are obsessed with figuring out whether famous women are trans, be it Ann Coulter or Michelle Obama. Now, one MGTOW supporter claims he has the perfect formula to prove Keira Knightley is transgender. And it involves her “Adonis belt,” apparently.

According to Twitter user @EmergentReality, Knightley has a “male torso,” a tell-tale “Adonis belt” (or the outer grooves leading from the hips to the pelvis), a “slope back forehead,” a “large angular jaw,” and “wide shoulders.” Clearly, her thin, nimble frame means she must be a “male to female transgendered entity,” as he calls trans women.

It didn’t take long for users to point out that EmergentReality has no idea about the various shapes, sizes, and anatomical variations that both trans and cis women experience.

“The Great Transvestigation strikes again, folks,” Twitter user @indigowhiskey wrote. “It’s been over 3 hours and I still don’t know what an Adonis belt is.” Her tweet received over 350 retweets and 1,900 likes in less than 24 hours.

Imagine being so blinded by transphobia that you accidentally throw cis women under the bus in favour of transpiracy theories.

Uh huh. Usually anti trans go off the deep end by saying stuff like "attack helicopter" or the like…
You are a new level of crazy pic.twitter.com/ZHbgM4TqSG

While it’s common for cisgender people to insist that trans women have certain tell-tale signs that they are transgender, this isn’t true.

When transphobes argue that trans women all have features similar to cisgender men’s bodies, they’re essentially arguing that trans women are cis men. In reality, bodies are much more complicated than separating people into two categories, like a “male” body or “female” body. In other words, @EmergentReality is just working off a bunch of transphobic stereotypes to insist trans women aren’t as valid as cisgender women.

Not to mention, by asserting an incredibly high standard for women’s bodies, these same bigots target cis girls with nonconforming bodies, including muscular, buff, or masculine-presenting girls. In short, nothing about the Keira-Knightley-is-trans theory makes sense—unless you think all women, cis and trans alike, should fit into an incredibly narrow beauty standard.

"We can always tell!"

Ma'am this is a shopping center. That's a mannequin. Please, buy something or leave…

"This is the ideal male body. You may not like it, but this is what peak performance looks like."

I love that their Twitter handle has “reality” in it when they are very clearly divorced from it.

In short, cis men need to stop looking for “signs” that a woman is trans. It makes no sense… unless you fundamentally fear trans women’s bodies, that is.

Keira Knightly is cisgender, and beautiful. If she was transgender, she'd still be just as attractive. If your opinion of someone is soley based on whether they're trans, that's a form of bigotry ("but for" legal test)