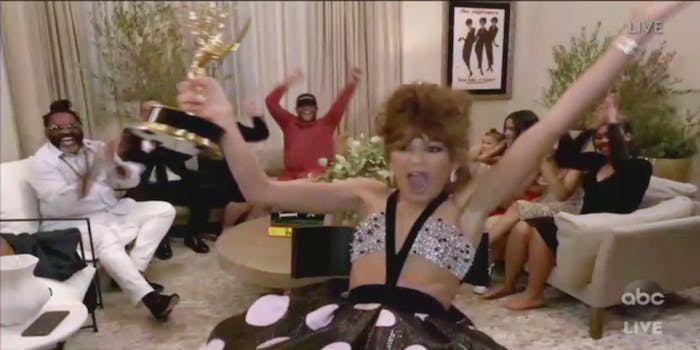 She became the youngest recipient of an Emmy in history.

Last night Zendaya made TV history after becoming the youngest actor to win an Emmy. At age 24, the Dune star was awarded outstanding lead actress in a drama series for her performance in Euphoria. She also joined Viola Davis as the only Black actress to win a Primetime Emmy Award for outstanding lead actress in a drama series since the award show debuted 72 years ago. But while tons of congratulatory messages took over the internet, some Twitter users didn’t see Zendaya’s soaring win as a victory for Black actresses.

The Emmys, like many other award ceremonies, has been known to exclude performers of color from nominations and wins. Hollywood itself has been critiqued for years about lack of representation on-screen and behind the camera, further cementing Zendaya’s win as a monumental achievement in the TV and film industry. But, some people didn’t see it as such. Given that Zendaya is biracial—the actress was born to a Black father and white mother—some Twitter users didn’t perceive the title as a win for Black women.

“It’s disingenuous to give her this historic groundbreaking title when we know she’s biracial, and being mixed with white helps in this industry,” tweeted @me_michelley.

Others defended the actresses’ win, stating that her race should not be the focus and that being biracial is a legitimate means of identifying as Black.

“I thought we had a movement going on with BLM so why do I see mostly black people hating on a BLACK woman winning,” tweeted @arecanoir.

Studies have shown that biracial people who are both Black and white are more likely to identify as Black and experience similar forms of racism and discrimination as their Black counterparts, especially those who are more visibly Black than ambiguous or white-passing. However, in an industry that is already predominantly white in casting, mixed Black women and lighter Black women are often given more opportunities and play positive lead roles than full Black women, creating a lack of representation for Black women at large and further pushing the stereotype that dark-skinned Black women are not desirable, as they’re left out of enriching, romantic roles.