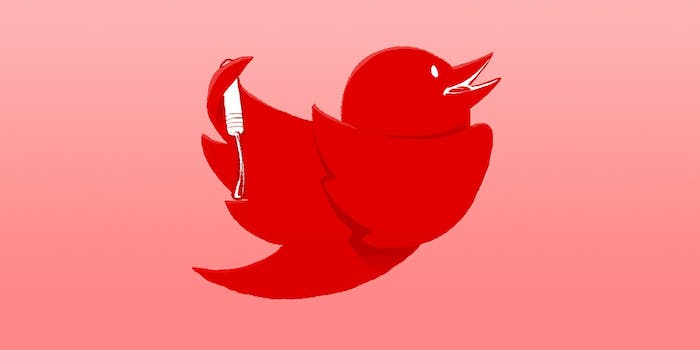 Why women keep tweeting about their periods to politicians

Hey, it gets their attention.

There are many ways to get a politician’s attention: protests, donations, boycotts. And now a new (crimson) wave of activism has women using social media to shame politicians who attempt to limit their bodily autonomy.

The Guardian reports that beginning November 2, Irish women have been tweeting the details of their periods to Irish Prime Minister Enda Kenny with the accompanying hashtag #RepealThe8th (which refers to the 8th Amendment to the Irish Constitution) in protest of the Republic of Ireland’s restrictive abortion laws.

“The women tweeting aren’t hysterical humorless harridans,”  wrote Irish comedian Grainne Maguire, who instigated the tweet-a-thon, in the Guardian. “They are funny, clever, articulate women who are tired of men feeling entitled to control their bodies.” Indeed, the tweets range from humorous to heartbreaking:

@EndaKennyTD 1st period since my stillborn baby. I carried her for 6weeks after her diagnosis, losing my mind with grief. #repealthe8th

Women deciding to share the contents of their uteruses (figuratively speaking) with politicians is a recent but regular phenomenon, and seems to have become the ultimate method of talking back to anti-choice lawmakers. Here are just a few examples of women taking to the Internet to make politicians see red:

Talking Back to The Donald

Earlier this year, Donald Trump provoked the ire of women when he said Fox News host Megyn Kelly had “blood coming out of her eyes—blood coming out of her wherever,” after she questioned him during a Republican presidential candidate debate. This was interpreted as Trump jumping to the well-worn sexist conclusion that if a woman is being assertive, it must mean she’s on her period. (Kelly shot back, “I certainly will not apologize for doing good journalism.”)

Women immediately took to Twitter to keep the bouffanted tycoon abreast of their menstrual cycles, with tweets ranging from the concise to the political.

@realDonaldTrump I've been bleeding for two days and my brain is STILL working better than yours. #periodsarenotaninsult

(And that’s not all: Portland, Oregon-based artist Sarah Levy subsequently painted a portrait of Trump using her own period blood called Whatever and auctioned it off for just over $4,000, with the profits going to support an immigrant workers organization!)

Last week, British MPs voted to retain the 5 percent tax on sanitary products, which are deemed a “luxury item” under EU law. This unleashed a wave of sarcastic tweets using the hashtag #TamponTax, including some creative uses of sanitary products.

Three women actually took their protest to outside the Houses of Parliament on November 7, dressed in white jeans and forgoing sanitary products “to show how ‘luxury’ tampons really are.” In response to criticism of the free-bleeding demonstration, one of the protestors, Charlie Edge, wrote on her Facebook page: “We’ve ALL tried to get this point across with polite debate and it hasn’t worked. This may not have solved the problem, but it’s definitely got people all over the world speaking out about something that they’re passionate about.”

Writing letters about the uterus

In 2011, British women began writing graphic emails and blog posts to Conservative MP Nadine Dorries, who has said her experiences as a nurse led her to believe the abortion time limit should be 12 weeks. Dorries has voted to reduce the UK time limit on abortion as well. Her most recent attempt to curb women’s reproductive rights has been to try alter the law on counseling offered to women seeking abortion.

Dorries’ proposed amendments to the Health and Social Care Bill 2011 would have blocked abortion providers such as BPAS and Marie Stopes International from providing counseling, and opened up the provision to “independent” groups – which could include faith-based groups intent on persuading women not to have abortions.

In response, feminist Zoe Stavrini started the blog Dear Nadine Dorries in which she and other women published their letters which detailed their relationships with their reproductive systems—periods, pregnancies, miscarriages, abortions and all. The tag line is “If you’re so interested in our uteruses, we’ll tell you all about them.” As one writer pointedly ended her letter describing an extremely difficult pregnancy, “Perhaps you can tell me about your [uterus] some time? Except… it’s none of my business, is it?”

Given the popularity of the tactic, it’s clear that a bit of public menstruation still retains the power to get people talking about the issue.