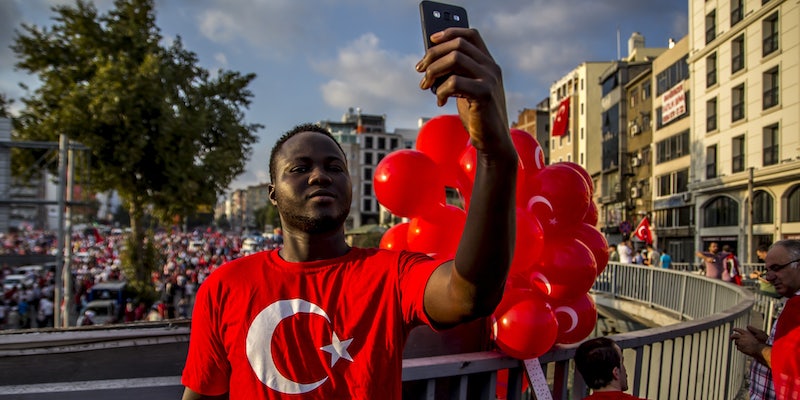 Do Turkey’s police use social media monitoring to crack down on dissent?

Turkish people have witnessed journalists being arrested for their news and for their tweets critical to the government. Pro-government companies tried to censor hashtags on social media. And the government shut down internet access to suppress images of protests while it was jailing opposition politicians. Now, the country is witnessing mass arrests of ordinary citizens for tweets that the government dislikes.

Turkey’s state-run news agency, Anadolu Agency, recently reported that Turkish National Police Cyber Department was able to identify 10,200 people who shared posts on social media that were “favorable” to the Gülen Movement —a religious sect that Turkey’s government holds responsible for the July 15 coup attempt and designated a “terrorist organisation.” According to Anadolu, Twitter and Facebook provided “real-time information” to locate users, helping Turkish law enforcement to put 1,213 people in pretrial detention, and 818 on judicial control, while the remaining people are still being investigated.

According to the Twitter Transparency Report, the company has never shared user information with Turkish authorities despite requests on 2,361 users since 2012. In recent years, Turkey has been among the top five requesters of user information from Twitter, but unlike other countries where the company provided 60 to 80 percent of requested information, Turkey’s requests were never filled. However, Twitter has bowed down to Turkey’s censorship pressure since March 2014, when the country’s leader, Recep Tayyip Erdoğan, vowed to “wipe out Twitter” for being the platform where evidence of government corruption spread before the local elections. Currently, Turkey tops Twitter’s content removal charts by sending more removal requests than all other countries combined.

According to the Facebook Government Requests Report, the company has shared information on 1,467 users with Turkish authorities since 2013, satisfying about 70 percent of Turkey’s requests and censored 14,105 pieces of content in Turkey during the same period. Turkey first started temporarily blocking Facebook nationwide, alongside Twitter, as a response to a hostage situation in April 2015. Then, starting with the deadly bombing attack on July 20, 2015, Turkish ISPs blocked both social media platforms by ‘throttling’ (slowing down internet traffic to make them unusable) after every single bombing incident.

Regardless of the pressure from Turkey’s government, Facebook and Twitter are unlikely to share user information on a mass scale—and reports that they did so are untrue, according to two people familiar with the data-sharing policies of both companies. An outsider researcher, who also spoke on condition of anonymity, concurs, saying Turkish investigators must have used other tools, such as public data scraping, deep packet inspection (DPI), and other more conventional surveillance methods in their crackdown on the Gülen Movement.

According to the leaked emails of Turkey’s energy minister, Berat Albayrak, the ruling party has been interested in social media monitoring since the anti-government protests in June 2013.

In October, Twitter ceased providing data to the social media analytics company, SnapTrends, after a Daily Dot investigation revealed the company provided surveillance tools to police departments. According to Bloomberg investigation, SnapTrends pitched its services to Turkish authorities while selling Twitter data to other countries with questionable human rights records, such as the United Arab Emirates and Bangladesh.

SnapTrends CEO Eric Klasson denied working in Turkey in response to the Daily Dot’s questions, saying, “We have never had any customers of any kind in Turkey—directly or indirectly. We have no plans now or in the future to market or sell into Turkey.”

However, leaked emails from Hacking Team, the Italian company that sold targeted surveillance tools to Turkish National Police since 2011, as the Daily Dot revealed last year, shows that SnapTrends’ global partner Chenega signed a non-disclosure agreement with Hacking Team in March 2015, and the three companies discussed a joint effort for “prospective customers” in the surveillance market, including “25 countries in the Middle East.” The trove of emails does not validate whether a deal materialized in Turkey.

In an email response to our questions, Hacking Team’s CEO David Vincenzetti said, “Hacking Team does not have any relationships in Turkey, and does not do business with Chenega/SnapTrends.” After we listed evidence of their operation in Turkey, they declined to respond. Chenega Corporation’s headquarters in Alaska—and their Dubai office, where their “foreign clients” were allegedly handled—did not respond to our requests for comment.

There are dozens more surveillance firms that either buy the data from social network companies or scrape users’ accounts to provide detailed online profiles of ordinary people for the use of law enforcement agencies without a court order.

Turkey’s repressive government has also an in-house solution. In 2015, STM, a public company founded by the Turkish Army and the Ministry of Defence, has publicized a social media sentiment analysis based on Turkish users’ tweets on Armenian Genocide. (Turkey officially denies the genocide, and the subject is quite a taboo in Turkey.)

Head of STM’s big data department, Umut Demirezen, said in an email response that they were not asked to collect or analyze social media in this case and added that their mission only covers cyber defense, not social media monitoring.

However, an insider within the Turkish social media analytics sector, who spoke on condition of anonymity, tells the Daily Dot that none of the Turkish companies have direct access to Twitter’s Firehose (real-time, unfiltered access to all tweets), but instead they collect a fraction of Twitter’s public data. If the news report on the investigation is true, the source added, it must have been done with the help of a foreign company that has such access, or with the help of DPI tools inside Turkey, such as the Procera Networks tools provided to Turk Telekom—Turkey’s largest ISP, owned 30 percent by the government.

Some researchers in Turkey, however, are more skeptical. A privacy activist inside Turkey, who requested anonymity, tells the Daily Dot that state-run Anadolu Agency’s news article could simply be fabricated to intimidate dissidents. Noting that the Turkish Police targeted social media users in the past by profiling them solely on the accounts they follow, the activist suggests that the number of the arrested, if true, could be only those who use their real names on social media.

In Turkey, most of the media outlets have business relationships with the government and do not fact-check officials’ claims. All freedom-of-information requests on the coup investigation are declared ineligible. After the coup attempt, dozens of independent outlets were shut down, including three news agencies; another was seized by the government in March. The decrees issued under Turkey’s state of emergency, which was triggered by the coup attempt, has created a “climate of intimidation,” according to the United Nation’s special rapporteur on torture, Nils Melzer, which makes the abuses go unreported and not investigated.

Under oppressive regimes, where companies like SnapTrends provide tools to identify dissidents and firms like Hacking Team target them, ordinary people leave the social media platforms altogether or self-censor themselves, Bloomberg reported. Turkey’s once enthusiastic online population, which had turned to social media even more after the decline of press freedoms, could be next.