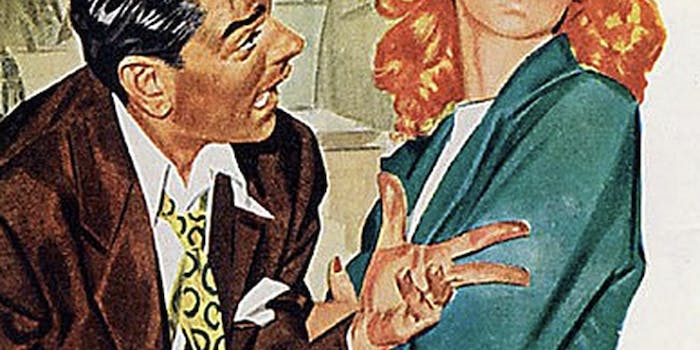 One Tumblr’s quest against “mansplaining”

Academic Men Explain Things to Me has seen more than 300 submissions in less than three weeks.

Are you a competent professional who doesn’t need to be told how to do your job? Are you also a woman?

If so, you’ve probably experienced the phenomenon known as mansplaining, in which a member of the opposite sex attempts to inform you—often poorly—about something you already know how to do. For example, consider the tile manufacturer who tries to outsmart a female materials engineer at her own game or a presenter who blows off a female researcher, not realizing that she’s responsible for the majority of the research in his field.

Academic Men Explain Things to Me was designed to highlight the practice in academic circles, but it has quickly progressed to mansplainers in all walks of life. The blogger accepts and posts personal experiences submitted by women from all over the world.

The blog is the work of an anonymous associate professor of humanities who was was tired of watching mansplainers run rampant in her realm of academia.

Less than three weeks old, it has more than 300 submissions from women who find themselves no better informed than before male laypersons attempted to school them. Though the blogger only shared the site with friends at first, she’s accumulated more than 1,500 followers on Tumblr and over 300,000 page views.

The Daily Dot asked the anonymous blogger to explain her blog—no mansplaining necessary.

DD: How did you get the idea for your blog?

I got the idea at an academic conference where mansplaining was very much in evidence. In talking to other female scholars at lunch it became clear we had all similar experiences in the past, and it occurred to me that an anonymous online forum would be the perfect place to gather more of these.

I thought mansplaining among academics might be of interest even to non-academic readers because, although it’s a particular environment, it’s also an interesting test case for the idea of mansplaining. Women in academia are there because they are extremely knowledgeable about something. If men who encounter these women often assume these women don’t know their own fields, that is interesting evidence of the prevalence of mansplaining.

In fact, it’s proven to the be the case that we have gotten a lot of submissions from women who are not academics—including women who work in tech support, a member of a teacher’s union, someone who works in radio, and so on. People have reported mansplaining from customers, salespeople, employees, fathers and brothers.

DD: You’ve had almost 250 submissions in just one week. How did you get so much awareness so quickly?

On a Saturday, I started the tumblr I sent it to a few close friends who I knew would have stories to tell, and I asked them to share it with friends of theirs. When I logged on to FB the next morning, I found it popping up in my feed via friends who had heard about it already, and had no idea whatsoever I was the one who had started it! That told me that it was serving a need.

But what really got the blog out beyond social networks was an online interview I did a few days later with the web publication Inside Higher Ed. I got about 30 submissions in the hour after the story posted! Inside Higher Ed must have found out about the tumblr through its circulation on FB. It also got posted it to a few academic listservs, which are usually members-only, so it was lucky for me that people thought to do this on their own, as I wouldn’t have been able to.

I think the blog circulated so quickly because academics are often tightly networked electronically with people in their fields, so something that enters the network will get fast penetration if it’s of interest.

DD: What sort of feedback have you gotten from readers?

Feedback has been very positive. I’ve heard from many women who are heartened to see that they are not alone, and even from men who have vowed to avoid mansplaining in the future! There have been a handful of nasty trolls, but nowhere near as many as I anticipated. Someone even started a spin-off blog on mansplaining in regard to sport, which seems to be doing well!

I thought running the tumblr might be a bit grim, but in fact I’ve been encouraged by all the positive feedback. And while stories are sometimes enraging, the women telling them are smart and funny and positive. I think my favorite story might be from an anthropologist who got mansplained after facing off with polar bears while doing fieldwork in Quebec!