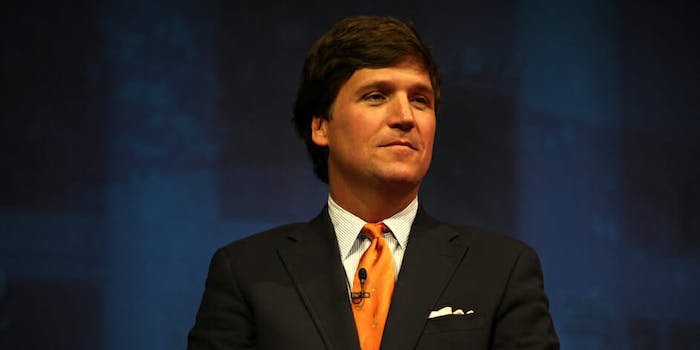 Several companies have said they will no longer air ads on his show.

A number of advertisers are no longer airing ads for Tucker Carlson‘s show amid backlash he is receiving for his most recent comments about immigration.

Carlson, a Fox News host, has drawn criticism after saying that immigrants make America “poorer, and dirtier, and more divided.” Carlson made the remarks during a show late last week.

In the wake of it, a number of advertisers have pulled ads from Carlson’s show. The network, in defending Carlson, placed the blame on left-wing groups using Carlson’s comments to rile up social media users.

Pacific Life, an insurance company, announced last week it would pull ads from the show, adding that it disagreed with his comments.

“Our customer base and our workforce reflect the diversity of our great nation, something we take great pride in,” the company wrote in a statement. “We will not be advertising on Mr. Carlson’s show in the coming weeks as we reevaluate our relationship with his program.”

On Monday, Minted, a design marketplace, also announced that it had “permanently discontinued advertising on this particular program.”

“We do not agree with Mr. Carlson’s comments and his opinions are not consistent with the values we hold at Minted,” the company wrote on Twitter in response to people bringing up the segment.

Indeed, a job posting website told HuffPost it has not had advertisements run during the Fox News host’s show in more than a month.

“As a company, we are nonpartisan―our site is for everyone, regardless of background or beliefs,” the company said in a statement to the news outlet on Monday. “Indeed has not advertised on the Tucker Carlson Tonight program in over a month, and has no plans to do so in the future.”

Other companies such as Nerd Wallet, Nautilus, and SmileDirectClub have also said they will no longer show ads on Carlson’s program.

Carlson has defended his remarks, and Fox News said it was a “shame” that “left-wing advocacy groups, under the guise of being supposed ‘media watchdogs’ weaponize social media against companies in an effort to stifle free speech.”

Update 5:09pm CT, Dec. 18: Fox News said in a statement to the Daily Dot on Tuesday that Tucker Carlson is “being threatened via Twitter by far left activist groups with deeply political motives.”

The statement continued: “While we do not advocate boycotts, these same groups never target other broadcasters and operate under a grossly hypocritical double standard given their intolerance to all opposing points of view.”