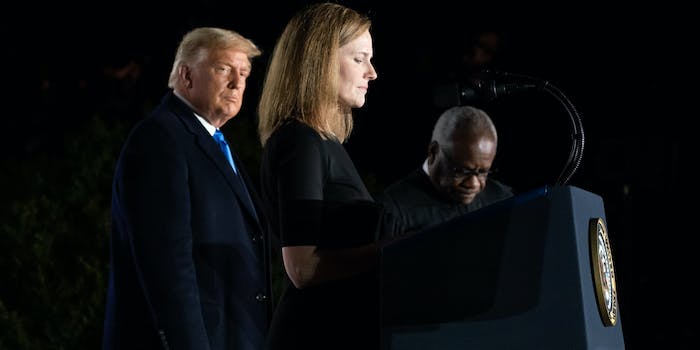 Trump did better with white women in 2020’s exit polls. Why?

You guessed it: racism.

In 2016, pundits and feminists faced a difficult question: Why did white women vote for Donald Trump over Hillary Clinton? According to a 2016 exit poll published by CNN, 52% of white women cast a ballot for the president, compared to just 4% of Black women and a quarter of Latina women.

Some political analysts believed this was a fluke and would certainly change in 2020. But then it happened again. Initial exit poll results from Edison Research reveal white women preferred Trump over Joe Biden and that Trump’s popularity among white women increased in 2020, according to the New York Times and the Washington Post. While white women’s (initial) vote shrank from 37 to 33%, Trump jumped up by three points to 55%. Biden, meanwhile, didn’t take any hits from Clinton’s 43%.

Exit polls generally have some bias baked into them. Edison Research generally ends up overrepresenting people likely to chat with a pollster compared to those who would rather not, Time reports. This means statistics from exit polls need to be closely examined and adjusted. In 2018, the Pew Research Center shifted Trump’s lead with white women to 47% and bumped Clinton up to 45%. Similar problems likely plague the 2020 exit polls, albeit Edison Research’s pollsters carried out their results this year by speaking with over 25,000 respondents across telephone, Election Day voting locations, and early voting centers, the Washington Post notes.

But despite exit polls’ flaws, one dubious problem remains: Trump keeps performing well with white women. This is no longer a coincidence, but a pattern. Where does it come from? And why would white women choose Trump twice?

Despite claims that white women were abandoning Trump, changing their minds, and feeling alienated by his rhetoric, white women still turned out to vote for Trump in numbers shockingly similar to 2016’s exit poll because their interests are far more aligned with white supremacy than radical feminism.

Whiteness festers off white women’s bigotry against marginalized people. It unifies white women with white men in positions of power, gives white women a sense of belonging and purpose in a (racist and settler-centric) American project, and, in the case of particularly privileged white women, lets them hold power over people far more marginalized than them. Bitch Media’s Tamara Winfrey Harris spoke to this problem in 2016, declaring how, despite the president’s glaring misogyny, white women still cast a ballot for him four years ago. Very little has changed four years ago. Why would it? White feminism is an enormous dud not despite white womanhood but because of white womanhood.

“The mainstream gender equality movement that has come to be known as ‘white feminism’ is characterised by cults of personality, capitalism, and the needs of straight, white, middle-class American women. It treats poverty as an afterthought, even as women are 35 percent more likely to live in poverty than men,” Harris writes. “The path ahead begs for intersectional feminisms and the centering of marginalized women, including women of color, queer women, and poor women.”

White female Trump voters are not a recent phenomenon but the latest development in a long history of far-right, politically mobilized white women. In her review for Elizabeth Gillespie McRae’s Mothers of Massive Resistance: White Women and the Politics of White Supremacy, author Marjorie J. Spruill notes how right-wing women have historically relied on feminized labor to foster and expand white supremacy’s influence. White women raise their children to harass Black Americans, McRae’s book notes, and instill their sense of value and worth through white supremacy’s future existence. And they used the suffragettes’ political gains to do so, fostering institutional racism wherever they found government work.

This problem isn’t a regional one but a national one, McRae concludes, where women across the country “practiced similar politics, invoked similar white supremacist tropes, capitalized on their identities as mothers, and tied themselves to a broader conservative political language.” Her book’s key conceit is not that white womanhood was recently mobilized into the right but that its right-wing mobilization dates all the way back to the 1920s. We shouldn’t be surprised that white women largely cast their ballot for Trump again. White women are continuing a legacy that started with their mothers, their mothers’ mothers, and their mothers before that.

White womanhood is fundamentally racist. It worships an ideal future that is white, Christian, and fascist. Liberal white women may feel uncomfortable acknowledging the racist legacy they’re born into because they, too, benefit from their parents’ and grandparents’ whiteness. But this ignorance (feigned or real) cannot be excused when the problem begins in their own white houses.

“Think about the women at Trump rallies who not only were not offended by Trump’s claims of pussy grabbing, but donned t-shirts offering their pussies up for the cause,” Harris wrote four years ago. “Those women, who defended the candidate’s behavior as ‘just how men are,’ find little appeal in feminism because they like defined gender roles and believe the lie that feminism merely seeks to replace men with women.”

White women will not abandon Christian fascism any time soon. Not this year, not in 2022, and certainly not in 2024.