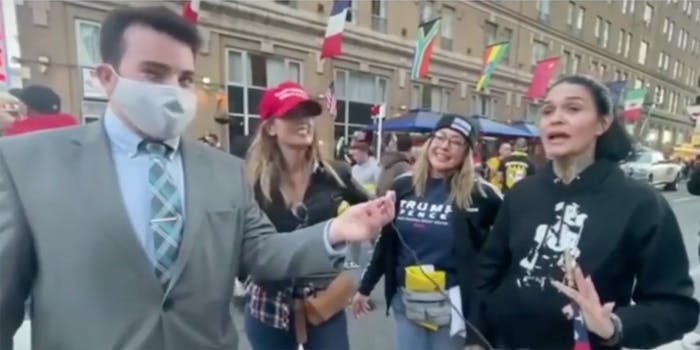 Trump supporter advises women: ‘Get grabbed by the p*ssy’

The three women in the video also have some thoughts on AOC and Claudia Conway.

A video of three women supporting President Trump shared on TikTok, in which one of the women advises women to “get grabbed by the pussy,” resurfaced Monday thanks to a boost on Reddit.

The video of the women, interviewed by an unidentified news reporter in what appears to be Washington D.C. for a post-election Trump rally, was initially shared to TikTok on Nov. 23 by user @pennyidontseenobo.

The phrase in the video that’s getting the attention clearly puts a twist on the infamous 2005 Access Hollywood comment by President Trump that nearly derailed his 2016 presidential campaign.

The video in which the comment appears is actually the third of a three-part series posted by the TikToker.

In the first part, one of the women in the video claims to have driven from Chicago to show support for Trump. They then asserted that Trump has done great things for women.

“Look how many women he’s put on his Cabinet,” said one of them, who is wearing a Trump shirt, a knit cap with a Thin Blue Line flag on it, and identifies later in the interview as a nurse. She also mentioned Trump’s campaign manager as one of the many Trump-associated women who are “breaking the ceiling,” but was unable to come up with Kellyanne Conway’s name.

“And we haven’t even started drinking yet,” noted the nurse’s friend, a woman dressed in black with prominent neck tattoos.

“She was the first woman to run a successful presidential campaign,” the nurse said.

“The one with the horrible daughter?” asked her MAGA-hat-wearing friend helpfully.

In the second video, the reporter asks their opinion of Rep. Alexandria Ocasio-Cortez. The woman with the neck tattoos asserted, “I would headbutt the teeth out of that bitch’s face.”

They also revealed themselves to be climate change deniers.

But it’s Part 3 of the video triptych, posted to several Reddit subreddits Monday (including r/PublicFreakout), that’s capturing people’s attention. The provocative advice that’s making it viral came in response to the reporter’s question, “What is your one piece of advice to the young women of this nation?”

The woman with the neck tattoos advised, “Get grabbed by the pussy—for real. And this is why.”

“Stick up for yourself!” the MAGA hat woman interjected.

Then the woman with the neck tattoos said, “I feel like all these women are …”

“… Me Too-ing themselves into an abyss of … ” the MAGA hat woman contributed.

“Victimization!” the nurse concluded. “They want to be victims.”

They then pivoted to assert that women are strong and that men and women are different, which then led to the reporter following up and asking what the difference is between men and women.

“A penis and a vagina,” asserted the neck tattoo woman. “That’s it.”