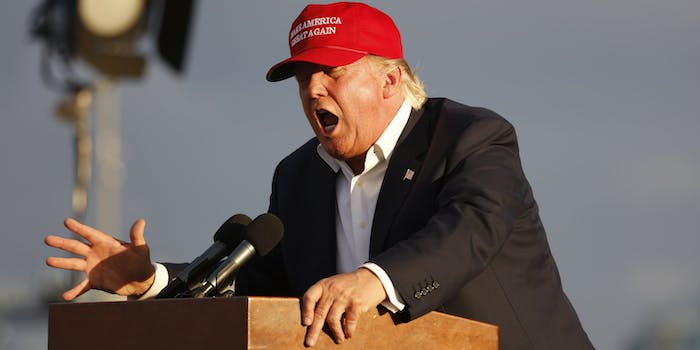 Trump says his position has not changed—but that may not matter.

President Donald Trump may have just had his bluff called on his biggest campaign promise of them all.

Faced with the impending possibility of a government shutdown on Friday, Trump signaled on Monday that he may be willing to fund the federal government without paying for his U.S.–Mexico border wall—at least for now.  The president previously said he would not approve a spending bill that does not fund the wall.

Trump’s softened stance on his border wall highlights a Congress heavily divided along partisan lines and a president who has miscalculated his position, painting himself into a corner with one narrow path to victory and two boulevards leading to defeat.

The Washington Post and Associated Press report that Trump told a group of between 20 and conservative media members Monday afternoon during a private meeting that he may sign a spending bill that excludes the necessary funds to begin construction of his 2,000-mile wall along America’s border with Mexico. Instead, the president would reportedly attempt to fund the wall in September.

On funding the border wall, Trump said he could get it this week or the administration could come back to it in September.

Democratic lawmakers have vowed to block passage of the funding bill if it includes border wall funding, but the party’s leadership says it will approve an increase in funds for border security. If the spending bill does not pass, the government will be forced to halt all spending until spending legislation is approved.

Following the Post and AP reports, Trump called the outlets “fake media” and promised that his “position on the WALL” has not changed. The president did not address whether he would still demand Congress fund the wall in this week’s spending bill. It is possible for Trump’s position on the wall to remain intact even if his timeline for funding its construction shifts to later this year.

Don't let the fake media tell you that I have changed my position on the WALL. It will get built and help stop drugs, human trafficking etc.

By demanding that Congress pay for the wall’s construction, Trump put himself in a nearly unwinnable position. Either he demands funding for the wall, and Democrats force a government shutdown at a time when Republicans control both houses of Congress and the White House, or he backs down and fails to achieve one of his brand-defining campaign promises within his first 100 days.