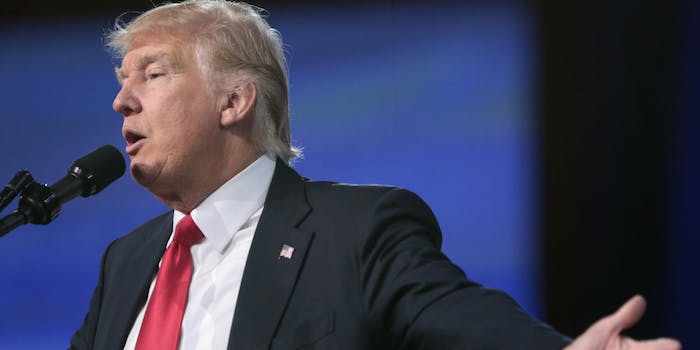 Background checks are being stripped at the state and federal levels.

On Tuesday in Parkland, Florida, 17 people were killed after a former student opened fire at Marjory Stoneman Douglas High School. The school shooting is one of the worst in recent U.S. history, and it follows just months after a shooter killed over 50 people in Las Vegas.

Discussions about gun control have been going on for decades, and it seems like there’s no end to American mass shootings in sight. In fact, the current White House administration may be making the problem worse, not better. A report from Newsweek reveals that President Donald Trump quietly repealed an Obama-era regulation last year that restricted gun access to people with severe mental health issues.

Under the regulation, the Social Security Administration (SSA) reported to the National Instant Criminal Background Check System (NICS) with information on Americans that require help accessing their Social Security benefits. The SSA also reported to the NICS on potentially dangerous citizens who should be flagged during background checks. But under Trump’s repeal, both policies went to the wayside, significantly weakening the federal government’s control over public gun ownership.

“It is correct to state that there is no inherent connection between being mentally ill and being dangerous,” Sen. Chris Murphy (D-Conn.) said in the Senate during the initial repeal vote, Newsweek reports. “But the risk here is not just that an individual is going to buy a gun and use it themselves. The risk is that someone who can’t literally deposit their own paycheck probably can’t, or likely can’t, responsibly own and protect a gun.”

In Trump's address to the nation on the Florida mass shooting, he vowed to "tackle the difficult issue of mental health. Last year, he signed a bill that makes it easier for people who are mentally ill to purchase guns.

Ironically enough, Trump called the Parkland gunman “mentally disturbed” in a tweet on Thursday morning, despite the fact that the shooter’s motive and mental stability remain unclear. But while Trump stresses that citizens “must always report” people expressing “bad and erratic behavior,” the president’s own actions are creating a reality where authorities are helpless to prevent a mentally disturbed person from obtaining a gun in the first place.

Background checks remain one of the most contentious issues in the gun control debate yet, and for good reason. Under federal law, background checks are mandatory for any public gun vendor that wants to sell firearms to a customer. Since 1994, background checks have reportedly prevented over 3 million people from legally obtaining a firearm, with denials mainly issued to “convicted felons, domestic abusers, and the dangerously mentally ill,” the Giffords Law Center reports.

In short, it’s better for the federal government to increase, not decrease, background checks’ power because it can successfully prevent violent and abusive people from accessing guns. That’s why gun control advocates want to expand background checks to private and unlicensed sellers, a policy called “universal background checks.” But instead of expanding an effective policy, the Trump administration and the Republican Party are both peeling away at a program built to protect innocent people from gun violence.

And it’s not just the repeal that’s threatening background checks. President Trump’s 2019 budget calls for a $12 million drop in funding for both the National Criminal Records History Improvement Program and the NICS Act Record Improvement Program, which both play important roles in maintaining criminal background checks on the state level. Meanwhile, federal background checks for firearms have also since dropped, according to a July 2017 report, suggesting that fewer people are getting properly vetted under the Trump administration.

It’s a stark reminder that background checks aren’t just a campaign issue; the president and his party have—and have used—the power to quietly disrupt federal regulations that prevent dangerous, violent, and mentally unfit Americans from owning a gun. For firearm activists, that’s good news. But for everyone else, the world looks a lot less safe in 2018.

This isn’t just about mental illness

Mental health is complicated, and it’s hurtful to suggest that anyone with mental illness is inherently violent. People suffering from anxiety and depression aren’t necessarily prone to committing mass shootings just because they deal with a mood disorder, and the repealed NICS regulation wasn’t an attempt to target people with low IQs or mental processing issues. Rather, the Obama administration wanted to protect Americans from mentally impaired citizens who may not be able to understand the damage and destruction that a firearm can bring to others.

The New York Times revealed last month that both the American public and gun control experts generally agree that the government should expand mental health care, prevent mentally ill customers from buying firearms, and institute universal background checks that prevent criminal buyers from obtaining a gun through a private seller. But instead, President Trump is actively working against expert advice.

Quick note for all the people arguing that Trump overturned Obama-era legislation that would've prevented people with severe mental illnesses from getting weapons: mental illness does not increase your propensity for violent crime. #GunReformNow 1/

Don't think that the Obama legislation would've prevented Parkland or would prevent another mass shooting. State law matters more. And these are Florida's state laws: https://t.co/OU1Y6scz2l

Whether it’s domestic abusers or violent criminals, background checks and federal regulations exist for a reason. While they might not end gun violence indefinitely, they can certainly make a dent in the sheer number of gun deaths and mass shootings, which now take 93 lives a day in America.