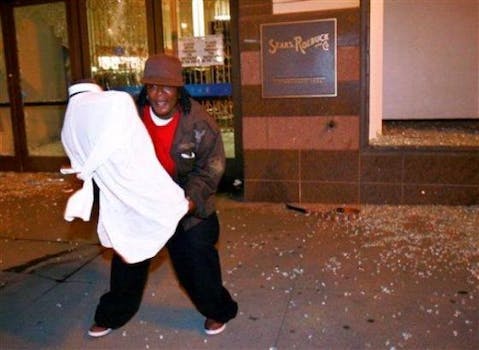 Trolls posted a series of fake tweets about Hurricane Sandy looters, and watched as the media reported them as fact.

The year’s most embarrassing work of Web journalism has barely received the attention it deserves. We’re talking about the Daily Mail’s piece on Twitter users bragging about their post-Sandy looting conquests, which quotes several obviously fake accounts. The Drudge Report and Infowars also picked up the story.

It turns out these tweets, which climbed to international attention via the phony #SANDYLOOTCREW hashtag, weren’t just random works of trolling: They were an organized effort put together by a group called the Gay N**ger Association of America (GNAA), an affiliate of hacker group Goatse Security.

We don’t want to dig into the depths of racial stereotyping that would lead a reporter to believe a tweet like this is real: “NIGGA I JUST STOLE A CAT OUTTA SUM1S HOUSE GET ON MY LEVEL.’” But nevertheless the Daily Mail earnestly reported on that tweet and other obviously fake posts—some of which used photographs taken as far back as 2005, according to a report in the Sydney Morning Herald.

“Catnapper: One person using the alias SevenleafB bragged about stealing a cat from a house during a looting-tour of New York,” read the caption to the photograph of the allegedly stolen cat.

It goes without saying that exposing racial biases was a big part of the GNAA’s goal. BetaBeat posted an excellent story earlier today that included an interview with one of the group members:

“To sum it up, myself and a few members of the GNAA thought that it would be amusing to pretend to be looters,” said Mr. Kaiser, who claims to be a 19-year-old African-American male living in New Mexico. “One of us came up with the hashtag #SANDYLOOTCREW. We were making the most ridiculous tweets that we could think .. .people will believe literally anything, even us stealing cats.”

He added, “Anyone who takes ‘NIGGA I JUST STOLE A CAT OUTTA SUM1S HOUSE GET ON MY LEVEL’ at face value probably shouldn’t be working in the news industry.”