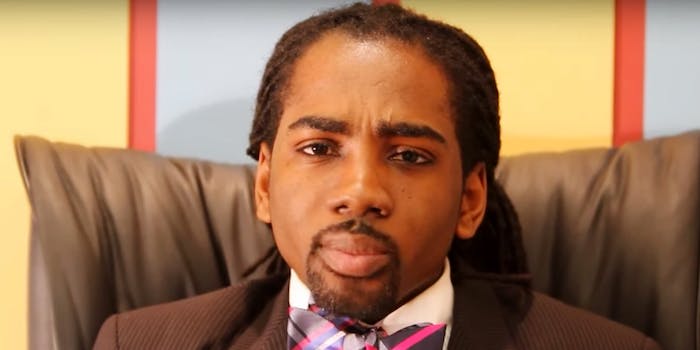 Councilmember Trayon White didn't even tell his staff he was leaving.

But White couldn’t be bothered to stay for his entire scheduled 90-minute tour—that his staff took the day off to attend–and mysteriously disappeared 45 minutes into his visit, according to the Washington Post.

Along with his staff, White was accompanied to the museum by Rabbi Batya Glazer of the Jewish Community Relations Council of Greater Washington, a group that has been heavily involved in fixing the first-term Democratic lawmaker’s image in the aftermath of his anti-Semitic comments.

“There’s nothing more powerful than visiting the Holocaust museum for understanding the culture of the Jewish community, and our concerns about anti-Semitism,” Glazer told a reporter who shadowed the tour.

Those anti-Semitic concerns became public after White shared a video of snowfall on his Facebook page and referenced a conspiracy theory that Jewish bankers control the weather, and more specifically, the light snow White was driving through at the time.

“Man, it just started snowing out of nowhere this morning, man. Y’all better pay attention to this climate control, man. This climate manipulation,” White said in the video. “And D.C. keep talking about, ‘We’re a resilient city.’ And that’s a model based off the Rothschilds controlling the climate to create natural disasters. They can pay for to own the cities, man. Be careful.”

White has since apologized for his comments and touring the museum seemed like an effort to become more educated about the persecution Jewish people endured during World War II.

Before he bailed on his tour, White and his staff asked a few bizarre questions to their guide. At one point, when looking at a photo of a girl surrounded by Nazi troopers with a sign that read, “I am a German girl and allowed myself to be defiled by a Jew,” he asked if the Nazi’s were “protecting” her. Later in the tour, an aide asked if the Warsaw Ghetto was like a “gated community.”

Right after the group paused before photos of German troops executing Catholic clergy in Poland by firing squad, White left the museum without warning anyone—including his staff and Glazer.

When Glazer texted him to ask his whereabouts, he wrote said he hoped to see her outside the museum but he had to leave soon for an event in Ward 8.

In light of the news, folks on Twitter were critical of his actions and called for him to resign.

White, it turned out, did not immediately leave for an event but was instead found standing alone on the sidewalk outside the museum.

“I’ll be coming back to see more of the museum. I didn’t get a chance to see the whole thing,” he said. “But I think it’s a lot of education here, a lot of synergy here between what happened to the Jewish community and the African community.”

Asked why he left the tour halfway and where he went, he said nothing and held his cellphone to his ear.

Then when he was asked if he had reassessed his anti-Semitic comments, White walked east on Independence Avenue.