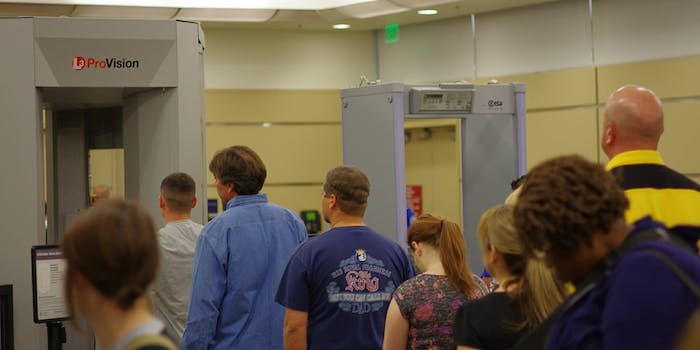 Trans travelers sound off on their TSA harassment horrors

Traveling while trans is even worse than you think.

When Shadi Petosky was going through security at the Orlando airport on Monday, she was trying to get home after a visit for her mom’s birthday. But Petosky, a writer and producer for the design firm Puny, didn’t make her flight.

That’s because she endured a humiliating screening ordeal with the Transportation Security Administration (TSA), just for being transgender. One she says culminated with American Airlines calling the police—who then made the airline issue her a boarding pass. Her livetweeting of the incident quickly went viral, drawing national media attention.

Today, the Twitter hashtag #TravelingWhileTrans is full of stories similar to Petosky’s—anecdotes from transgender people who have been pulled out of airport security lines, questioned extensively about their ID cards, and even mocked by airport security personnel.

I feel like I'm using a fake ID when I use my actual ID. Agents visibly try to reconcile an "F" with my appearance #TravelingWhileTrans

#travelingwhiletrans Aggressive pat-downs of "pocket" & groin regions, nearly every time I fly. @TSA agent loudly asked once "What ARE you?"

The Daily Dot spoke with three people whose airport experiences mirrored Petosky’s. Lauren Smith, the producer of the Sex, Lies, and Anarchy podcast, shared a painful memory of her February 2014 trip through the West Palm Beach International Airport. Smith, who spent 15 years working in the aviation industry, said she’d arrived early because she “knew her way around airports” and wanted some time to relax before her Spirit Air flight to Boston that day.

Smith didn’t want to go through the electronic scanner, so she was pulled aside for a routine pat-down. In the past, Smith had tried presenting herself as male to match her driver’s license, but felt uncomfortable being examined by a male officer.

This time, she was examined by a female officer. Everything seemed normal until the officer asked about “something near [Smith’s] inner right thigh.” Before she knew what was happening, Smith recalled, there were about seven uniformed TSA personnel, three men in blazers, and three sheriff’s deputies surrounding her. The crowd of security workers asked questions, searched her luggage, and made copies of her identification papers.

They told me they had to “clear the anomaly.” I said they had my permission to do whatever was needed to complete that process. They kept repeating that they needed to “clear it.” I said go ahead. By this point, I was tired from standing in one place for so long, and tears began to come to my eyes. They kept saying I would miss my flight until the area was clear. I eventually dropped my pants and my panties to the ground, because they asked me to, and four women and one man who were much less than an arm’s reach from me inspected my genitals. My reason for crying was not that I was exposing something private, but was because I knew the ultimate consequence of my resistance can be death. If I tried to resist and continued to do so, they could imprison or shoot me. I cried because I kept trying to not resist, but they kept telling me I was. It was very startling. I was threatened with arrest verbally several times.

Smith was escorted out by a female officer, she said, who then began chastising her: “She told me I should be more open about being trans. She said it was my fault for making all this happen, because I didn’t announce things to someone up front. It seemed like victim-blaming to me.”

“I thought that showing a driver’s license with a gender marker would be enough of an announcement,” said Smith.

Traveling is already stressful—and the TSA scanners make a lot of people uncomfortable, not just the transgender community. That’s why the National Center for Transgender Equality (NCTE) joined a lawsuit against the TSA alongside a consumer rights group, Competitive Enterprise Institute, and a civil liberties law organization, Rutherford Institute. All of the plaintiffs in the lawsuit—filed in July—argue that the scanning process is degrading and unnecessary. But for transgender people, it’s beyond just humiliating—the TSA’s scanning equipment is only set up to scan bodies as male or female, complete with blue and pink buttons for personnel to press when a traveler enters.

“For years TSA relied on body scanners and prison-style pat-downs as its primary tools despite mounting evidence that they don’t work,” said NCTE Policy Director Harper Jean Tobin in an email to the Daily Dot. “It’s a waste of billions and unfair to all travelers, but anyone who looks different or whose body is different is harmed the most.”

While the scanning machines aren’t the only problem for trans travelers, writer and actress Jen Richards (a series regular on I Am Cait) told the Daily Dot that the scanners flag her for “anomalies” about half the time she travels by air. Usually, she said, the flag is followed by a quick pat-down and she’s sent along to her flight. But in 2013 at Chicago’s Midway airport, she was sent through the scanner over and over again because the “anomaly” kept registering. After being made to wait with her luggage for awhile, she was then taken to a separate room.

Two female officers took me to another part of the airport into a private room. I explained to them what I thought the anomaly was, and they were surprised and said they would then get male screeners. I told them no, I was legally female and wanted female screeners, but just wanted them to know what they’d find. They were polite to me, and I was cooperative, but it was humiliating. I generally don’t [identify as trans right away]. It’s awkward, you’re in public, security is already invasive, you just want to get to your flight. I did explain to the screener when I was detained, but she said a supervisor still had to deal with it.

The TSA supposedly has a policy in place for sensitivity to transgender travelers. But as Richards pointed out, a page on the TSA site that once served to inform travelers about discrimination policies is now a dead link. A civil rights statement on another part of the site says only that the TSA complies with existing civil rights law.

But that’s about it. Even a search for “transgender” in the TSA site’s search field came up completely empty, revealing that either the TSA has no policy specific to trans travelers or there is a website glitch. 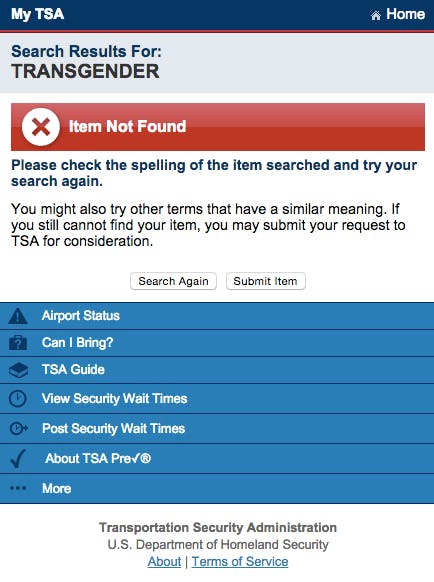 From the stories coming to light after Petrosky livetweeted her airport nightmare on Monday, transgender-specific sensitivity training appears to be missing at the TSA. As the Daily Dot learned from talking to sources for this article, the limited gender-reading capabilities of the scanners aren’t the only problem. Trans travelers also face TSA workers who lack cultural understanding of how to recognize and talk about trans travelers.

Leo Caldwell, who writes a syndicated column about trans experience for Gannett newspapers, told the Daily Dot that he tends to over-prepare for traveling due to anxiety around facing potential discrimination: “I always shave my face in hopes this helps. I don’t know why. But I do.”

Caldwell’s ID retains his birth name and a female gender marker. But his presentation is very masculine, and some airport workers just don’t seem to have the skills to handle that well.

The one experience that sticks out in my mind is when I went through and the TSA agent looked at my ID and my boarding pass and my ID again and said, “Natasha!?” I said, “Yep, that’s me.” My ID photo is current. And he said, “Really? You must have had a hard childhood.” And then he laughed. “Who named you?” he asked. I said, “My dad and yeah, it was hard.” But I was obviously speaking to a different experience than what he was. I don’t [come out as trans] with the TSA. I just keep confirming that it’s me. Gender is so pervasive in our cultural that it inhibits me from experiencing everyday things the way a cisgender person would. And I take the TSA thing just the same way. I wouldn’t know what it was like to casually go through security. And sure, I look like a man but I guess what does that even mean? You know… that’s why I keep my ID as female: to make people question what is a ‘female’ name, and what is a ‘female’ body.

Caldwell also noted that he’s been flagged by scanners in the past; interestingly, the flags ceased after he had top surgery. But before surgery, Caldwell would wear a chest binder: a compression top that resembles a tight tank top. If it seems odd that a common article of clothing would set off the machine’s “anomaly” function, it’s vital to remember that the scanners only recognize two types of bodies: male and female.

Richards said that she’s heard horror stories from friends who wear binders, and criticized the levels of humiliation endured by travelers when TSA tactics have been shown to be inefficient anyway.

“I know a few guys who have had to remove their binders right there in screening, in public. It’s mortifying,” said Richards. “The system is ineffective. And what are they really preventing anyways? Have female-appearing terrorists been trying to sneak explosives onto planes by sticking them in their crotch?”

.@JennyBoylan TSA takes all potential civil rights violations very seriously. We are looking into the situation now for further information.

As of Tuesday afternoon, though, the TSA had not issued a press release addressing the incident nor any updated guidelines on its policy for transgender travelers. In May 2014, Al Jazeera obtained through FOIA documents showing that transgender travelers were routinely singled out for “anomalies” and later filed civil rights complaints and incident reports. The Daily Dot searched through TSA press releases from May and June of that year and did not find a public statement addressing those incidents either.