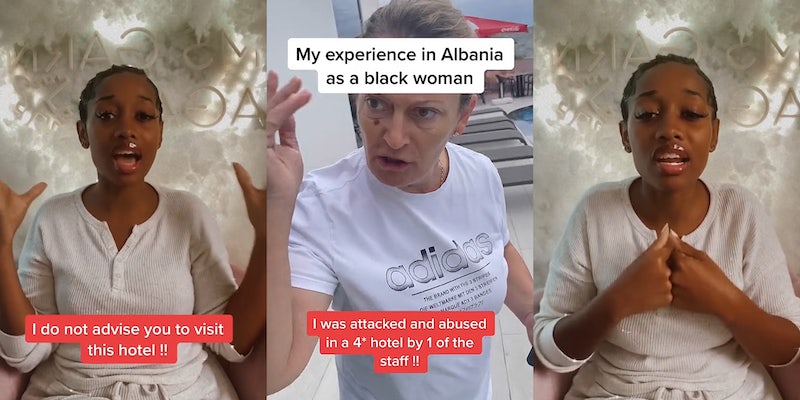 ‘I was attacked and abused at a 4-star hotel’: Black woman says she was attacked by hotel owner in Albania, sparking debate

'The way we were dealt with was awful, but I don’t feel like that’s a reflection of the people in Albania.'

Two Black travel TikTokers have gone viral after claiming they were attacked by a hotel owner during a stay in the coastal city of Ksamil in Albania.

According to a series of videos posted by users DRE3ZY (@dre3zydidit) and Ms Garn Again (@msgarnagain), the pair were confronted by the hotel owner, who pushed them while insisting that they pay for their rooms.

“What it’s really like as a black woman in Albania,” Ms Garn Again wrote in the caption of her video.

The initial video from Ms Garn Again has 1.8 million views, while DRE3ZY’s first video on the topic has 20,200 views.

Both videos open with a clip of an Albanian woman approaching the camera while Ms Garn Again can be heard saying, “Touch me again. Touch me again.”

The Albanian woman is saying “Mos je çmendur? Je çmendur, avash,” which translates to “Have you gone crazy? You’re crazy, slow down.”

In their respective videos, the TikTokers give a brief account of events, with both Ms Garn Again and DRE3ZY insisting that this single experience did not represent Albania. The majority of people they spoke with in the country, they say, were welcoming and pleasant.

“I hate the fact that, unfortunately, some people take one incident and make it into a whole country,” Ms Garn Again says in her video. “Everybody in Albania was lovely, except that one woman in that hotel… I feel like that was an isolated incident—it was a family hotel, and the family were disgusting.”

“The way we were dealt with was awful, but I don’t feel like that’s a reflection of the people in Albania,” she continues. “Everybody else we encountered was lovely. They were helpful, they were friendly, and I never felt victimized because of the color of my skin.”

DRE3ZY’s video paints a similarly rosy picture of Albania, even referencing some of the other TikToks the pair made together during their travels. The only issue, he says, was the staff of the hotel they chose to stay at—ADMIRO Hotel in Ksamil.

“That staff member put her hands on my friend, and I had to stand between them to prevent her physically assaulting my friend,” he says in the video.

He also shows a screenshot of an Instagram direct message exchange with the hotel in which he claims the hotel is threatening to leak his passport information unless Ms Garn Again tells the truth about what actually happened.

However, errors in the language of the message make its meaning difficult to decipher.

“Although we had that negative experience, we refuse to let that taint what we felt was a beautiful country,” DRE3ZY says.

While the pair deny they were discriminated against based on their race, the framing of the video as “what it’s really like as a black woman in Albania” has led some to discuss the potential racial aspect of the event.

“White Europeans are racist?? BREAKING NEWSSS,” wrote one user in the comments of one of DRE3ZY’s videos.

“This is racism bro,” agreed another. DRE3ZY responded to several similar comments vehemently denying racial discrimination, reiterating that their experience in Albania was positive with the exception of this incident.

When news of this event spread through Albania, many became curious about the hotel’s side of the story.

Appearing on EuroNews Albania, Dorela Pashaj, one of the family members in charge of running the hotel, said the entire event was a misunderstanding—though she also denied that her mother ever struck Ms Garn Again.

In Pashaj’s telling, the pair had reached out to the hotel via Booking.com asking for two free nights in exchange for promotional content at the hotel.

The message was received by the person who manages the hotel’s online content. Pashaj claims the online media manager had a conversation with the pair but never fully committed to the duo’s proposed offer.

Once DRE3ZY and Ms Garn Again arrived at the hotel, they were told they had to pay for their rooms. When it became clear that the pair could not communicate with the native Albanian speakers, Pashaj was contacted to translate.

Pashaj informed the pair that they would actually have to pay for the rooms and that their proposed deal was invalid. The travel influencers had asked to pay by card, which is unavailable at the hotel. After explaining to the duo that they would have to pay in cash, Pashaj says she offered to keep their passports as a guarantee until they could pay for their room. Pashaj claims that Ms Garn Again argued about this idea.

The trouble seen at the beginning of the video began the next day. According to Pashaj, the pair woke up early and appeared to pack up their car. This led Pashaj’s father to believe the pair were checking out earlier than anticipated, leading the family to think that they were leaving without paying for their rooms.

Owing to this misunderstanding, the family again demanded payment for the room and the pair’s passport information. Pashaj claims that Ms Garn Again said she needed to keep her passport as she planned to go to Greece, to which Pashaj answered that she could leave another form of ID or pay.

Pashaj alleges then Ms Garn Again asked how the hotel could justify charging 50€ for “five hours of sleep.” Pashaj reiterated the price, which she says she told Ms Garn Again the night before. Ms Garn Again allegedly refused to pay, Pashaj says.

This led to the events visible at the beginning of the video, though Pashaj claims that her mother did not push Ms Garn Again as claimed by Ms Garn Again and DRE3ZY.

While Ms Garn Again has not fully explained her side of the story on social media, DRE3ZY has posted several videos outlining his.

His version of events is similar, with some key differences.

To start, he alleges that the hotel was in contact with them until the day of their arrival. For example, he shares an email from the hotel they received the day they were supposed to arrive.

This email asked about the pair’s websites and Instagram data. While he says he’s usually happy to provide such data, they were already on their way and decided to just show the data in person.

DRE3ZY then claims that the hotel had no night staff available when they arrived. When they eventually found someone, he says that person connected them with Pashaj.

On the phone, DRE3ZY says Pashaj claimed to have initially approved of the deal, only to change her mind after talking with her brother. The brother believed that DRE3ZY and Ms Garn Again would not actually create the promised content, according to DRE3ZY.

Regarding the passport issues, DRE3ZY says that they were only informed their passports were being kept after they already handed them to the hotel staff. This caused the first argument, though the hotel owner, DRE3ZY shares, insisted that keeping the passports was normal for the hotel in cases like these.

As for the question about whether the hotel actually agreed to the promotional deal, DRE3ZY claims they did, showing an email screenshot to back up his point.

However, the ambiguous English in the email also makes it unclear whether the deal was truly confirmed. The email reads, “Sounds great. I will see for free room in those date with sea view and will write you today! Thank you!”

In his second storytime video, DRE3ZY says they did not know who the woman in the video was when she first approached them.

This woman asked for payment, and the duo only learned who she was once they again called Pashaj. According to DRE3ZY, they were repeatedly told to pay to get their passports back so they could leave—which confused DRE3ZY as he believed they were staying for two nights.

It was at this point that the owner allegedly pushed Ms Garn Again. This led to the events in the earlier video, and eventually, a larger argument. The argument ended once Pashaj allegedly told the pair to either pay or take their passports and go.

“So that’s what we did,” DRE3ZY concludes, noting they chose the second option.

Regardless of what happened, TikTokers are glued to the events of the story and are eagerly awaiting updates.

As one user wrote, “Got me waiting like this is a Netflix series.”

“Normal protocol of luxury hotels is they scan your passport and give it back, so when the hotel said they were keeping the passport there was a objection to which resulted in us complying with her so-called ‘policy,’” she wrote. “In the morning, we got up to go and create content to promote Albania and show everyone how beautiful the country is.”

“We were supposed to be there for 2 nights—and I would assume you’re allowed to leave the hotel as a guest staying there,” she wrote. “So her claim that ‘we only slept for 5 hours’ doesn’t even make sense when we had every intention of coming back to the hotel as we were booked for 2 nights. On top of that, we said to the women at the beginning of the discussion ‘can we deal with this when we get back’ clearly indicating we were coming back.”

The creator also says the hotel owner did push her, and she called the police following the incident.

“Her mother did grab and push me which was witnessed by another hotel guest and distressed me to the point I called the police…” she said. “The attack was traumatic to the point the male that was there stood in between us to stop her from attacking me again. I even began filming after the attack just in case she went to hit me again. In addition, the daughter was on the phone and not actually at the hotel so wouldn’t have seen the incident.”