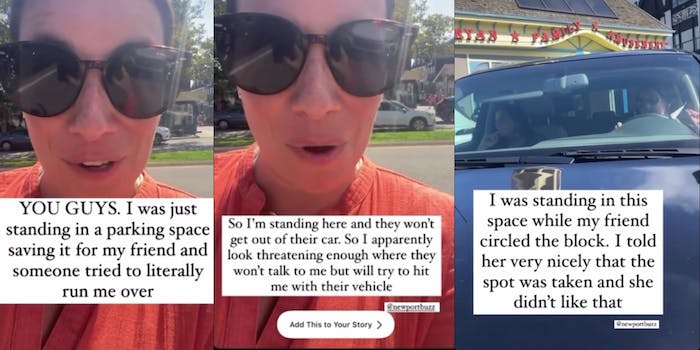 ‘These people tried to literally run me over’: Karen tries to save parking spot, throws tantrum when another driver swoops in

She filmed herself, seemingly thinking viewers were going to side with her. They didn't.

A luxury travel Instagrammer seemingly scrubbed her online presence after she filmed herself trying to save a parking spot for her friend.

The woman has been identified as Alexandra Rice, who posts content on the @travelingwithgusto Instagram account, according to the International Business Times. She is being referred to as a Karen by some people online who watched the video.

She was reportedly traveling in Newport at the time.

“I was just standing in a parking space saving it for my friend and someone tried to literally run me over,” Rice captioned the video.

As the video progresses, Rice can be seen being nudged out of the way as a woman driving an Audi works her way into the spot. Rice yells “Back up!” and “I’m not moving!” in the clip. She eventually gets out of the way.

“Are you out of your mind?” she questions the driver.

Rice can be heard calling the driver, “the rudest fucking person” she’s ever met.

When the driver exits the vehicle, she tells Rice, “Sorry, but that’s not how it works.” Rice then shares stills of the woman, her vehicle, and the vehicle’s license plate, attempting to identify her.

“Does anyone know this woman?” Rice captioned this part of the video. “Yes I’m being a petty bitch but I am FIRED UP.”

Rice appeared to address some of the backlash she received in a followup video, saying that her friend was just down the block and that she felt the other driver’s action was unwarranted.

“OK so let’s address me standing in the parking space,” Rice wrote. “My friend was right down the block it might not be proper etiquette for me to stand there but it also didn’t warrant someone trying to forcefully move me with their car.”

She once again accuses the driver of trying to run her over.

Rice’s Instagram account has since been removed, as well as the website and Facebook page for Gusto Travel. The video, however, has made its way to the r/PublicFreakout subreddit, where she has been criticized by redditors.

“If she was just a self-entitled dumbass wannabe, I wouldn’t care that she’s complaining about her idiot perception,” wrote user u/sik_dik. “But when she was clearly trying to get that woman doxxed, she crossed the line by a large margin. her internet badge needed revoked.”