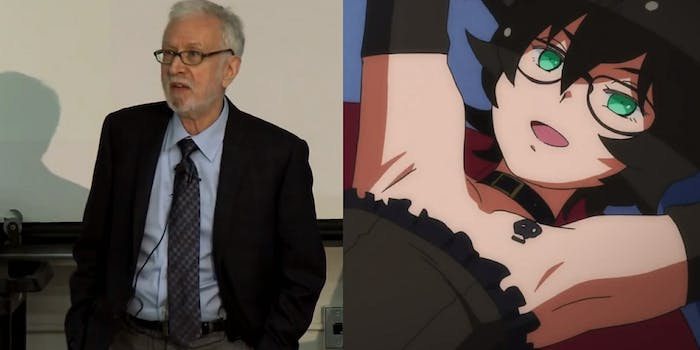 Hating trans people does not make you a trans 'expert.'

Dr. Ray Blanchard, an adjunct professor at the University of Toronto, is a well-noted foe to the trans community. His most recent bad idea that’s gone viral: Anime might be making trans girls transition.

Blanchard is a 73-year-old cis man who was once the head of the Clinical Sexology Services at the Centre for Addiction and Mental Health in Toronto, a facility that has come under fire for its “conversion therapy” type tactics, among other problems. He is probably most infamous for coming up with a typology that classifies trans women as either “homosexual transsexuals” or “autogynephilic.” Simply put, he believes trans women are either predominantly attracted to men or predominantly sexually aroused by “becoming” women.

Blanchard has continued to champion the idea over the years, which led him to endorse a Medium essay written by a Twitter user named SocialJusticeWizard recently. In his post, SocialJusticeWizard—who, to be clear, is no fan of social justice—claims trans women are actually “lonely” and “repressed” cis men who develop gender dysphoria because slice-of-life anime makes them realize that they “always wanted to be soft and gentle like [an anime girl], carefree and cheerful like her, enjoy life in its fullest without the heavy chains of masculinity, like her.”

In other words, SocialJusticeWizard thinks trans women are really cis men who want to become women after watching anime.

In reality, trans women are women who are forced to live in a world that assumes sex assigned at birth and gender are one and the same. Some trans women may repress their gender identity until they transition, so media that focuses predominantly on women, like slice-of-life anime, may bring out pre-transition trans women’s repressed feelings and desires. Other trans women may see parts of themselves in anime, feel attraction to certain anime characters, or simply like anime, period—all of which are all perfectly normal experiences.

Blanchard doesn’t see it that way, of course. He’s since slapped his seal of approval onto SocialJusticeWizard’s essay, praising it for introducing “the possible relations among anime, gender dysphoria, and autogynephilia.”

remember when a bunch of right-wing doofuses decided that I was a bad trans and possibly an otherkin because I talk a lot about Korra and JRPGs?

It didn’t take long for trans users to poke fun at Dr. Blanchard.

I have seen some shit takes in recent history, but this takes the shit cake.

Anime made me trans y'all. We finally got to the bottom of it. pic.twitter.com/UoJel3MyLH

Some people wonder how Dr. Blanchard is even a practicing doctor and educator if he is willing to endorse “anime made me trans” as a real theory.

If you’re a PhD then I’m a Royal Shakespearean actor. https://t.co/F8k0TKSGFB

The fact that you receive grant money and worked on the DSM IV and V will forever bewilder me.

Playing along with this preposterous theory, trans people are now declaring which anime series made them trans.

“Plaintiff was discriminated against because of her change from her birth-assigned sex, but it was not discrimination on the basis of sex but rather an emphasis on Western roleplaying games over so-called ‘Final Fantasy.’”¹

in light of the "anime makes people trans" article i'd like to acknowledge that naruto made me get in touch w the ~masculinity~ side of my nb identity and made me feel not so fucking stupid about it so that's that. lmao

i wish somebody could tell me, was it anime or demon possession that made me trans? these are the two opinions of the leading expert in the field and GOSH i'd hate to be one of those BAD trans who doesn't listen to her experts. please, daddy B, am I a demon or an anime, lmk

anime tiddies made me trans confirmed

In other news, Dr. Blanchard has also suggested that the trans community grew as “the goth/emo population died” and has compared transitioning to demonic possession.

“A couple weeks ago, he said that trans people are just goth kids. A little after that, he said that we’re demons. Now we watch too much anime,” one Twitter user wrote. “Someone got grandpa riled up about those gosh darn ‘transgenders’ again.”

A couple weeks ago, he said that trans people are just goth kids.
A little after that, he said that we're demons.
Now we watch too much anime.

Someone got grandpa riled up about those gosh darn "transgenders" again. *sigh* pic.twitter.com/X8udIuyPMT

Perhaps it’s time that we stop letting people who hate trans people call themselves “trans experts” and then give them space to discuss thier “expertise”? Just a thought.