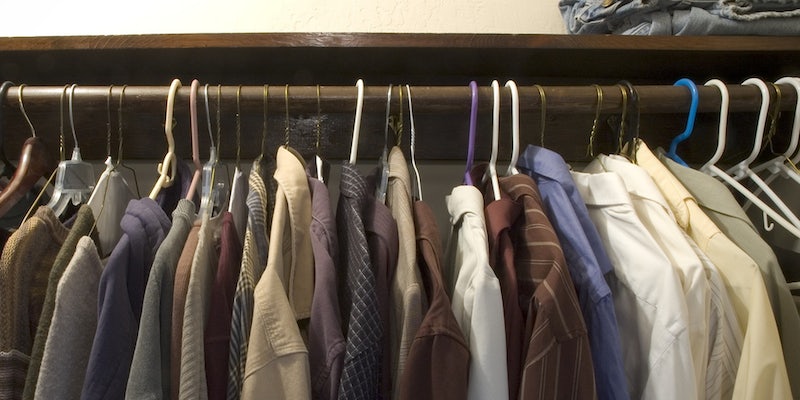 "Can there please be some kind of online exchange where trans boys can give their old clothes to trans girls and vice versa?"

It all began with a viral Tumblr post: “Can there please be some kind of online exchange where trans boys can give their old clothes to trans girls and vice versa? does that exist? if not am i allowed to start one because holy wow that would be the bomb diggety.”

It turned out that this kind of service didn’t exist yet, but oh boy, was it a popular idea. Soon enough, the Trans Clothes Swap Tumblr blog was up and running, exchanging clothes between trans people in need of a new wardrobe.

In an email to the Daily Dot, Cris, the blog’s creator, told us how the Trans Clothes Swap first came into being. “It was four in the morning and I had seen the post several times so I figured, why not? I definitely was not expecting the response we received, nor was I prepared for it. It was definitely very hectic the first couple of days!”

Trans Clothes Swap works kind of like a Tumblr-based version of Freecycle or Craigslist, taking submissions from anyone offering or requesting clothes. For many people, it’s a very necessary service.

“Being trans is difficult in our society for many reasons,” explains Cris. “And one that I think a lot of people don’t really think about is clothing. Clothing helps us communicate who we are to the world and so having clothes that match your gender identity can be incredibly important in relieving dysphoria as well as just feeling good about yourself. But getting clothes that match your gender can be very difficult for a trans person.”

“There are a number of barriers: for younger trans people, many are not out to their parents, or their parents don’t approve, and they don’t have resources of their own. For all trans people, again, not everyone is out: it can be very dangerous. And just shopping for clothes as a trans person can be very nerve-wracking, as well as result in harassment, especially for trans women and other DMAB (designated male at birth) trans people. Trans people have been banned from stores just for being trans, and get odd looks, may not be permitted to use the correct changing rooms, and can face open hostility from workers and other shoppers. A large number of other trans people also live at or below poverty, again because of lack of jobs and housing among other things.

“Ten or twenty years ago, you were lucky if you had a friend you were out to who would trade clothes with you. But because we have the internet, we have a much wider range of people donating. It is much easier to connect. It is also a great way for cisgender allies to do something concrete to support trans people.”

The blog is also branching out to include advice on things like clothes sizing, and where to access sympathetic health services in certain neighborhoods. A typical post reads, “Hi! I currently don’t have clothes to offer (but will soon!) but am offering my makeup services to those in the Douglas County area of Oregon.”

With the strong network of LGBT support groups and trans-friendly blogs on Tumblr, it’s no surprise that Trans Clothes Swap has already proven to be very popular, even expanding out to international requests. Even at the beginning, Cris knew within a couple of days that this couldn’t possibly be a one-person operation.

“The response we got was honestly astounding. Within six hours I had 300 messages. By the second day we had over 5,000 followers. I quickly realized that I wouldn’t be able to handle the volume by myself, and so got a couple other moderators to help run the blog, including my lovely girlfriend. This was definitely something people needed. I just hope we can partner with other LGBT organizations and help more trans people. It’s been really great and it feels really great to do something concrete.”

Trans Clothes Swap is the kind of obvious but brilliant idea that makes you wonder how it couldn’t exist already. It just took Tumblr to bring it to life.