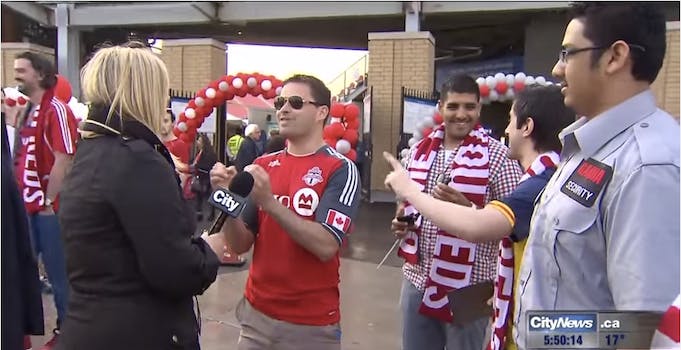 These sports fan messed with the wrong woman.

Almost exactly one year ago, a truly terrible meme rose to prominence. It involved people sneaking into the background of a live news shot and yelling—pardon the language—“fuck her right in the pussy.” But one reporter finally had enough of being the target of this disgusting “joke.”

Shauna Hunt, a reporter for Canada City News in Toronto, was interviewing people outside a Toronto FC soccer game when a group of rowdy fans decided to bring the meme back from the dead. But Hunt was having none of it, so she decided to confront the surly fans by schooling them on how sexist and offensive it was.

Unfortunately, they proved to be even bigger idiots than we could have possibly imagined.

Hunt issued a statement to the Toronto Sun:

“This is something that happens to reporters on a daily basis but on Sunday at the TFC game it was out of control. I had intoxicated men yelling it at me. I was interrupted during interviews and was anxious about going live. I felt like a piece of meat. I had reached my limit, and it was time to push back!”

Thanks @citynews for saying #ItsNeverOkay. Whether or not it's caught on film, sexual harassment at work is no joke. @Hollaback_TO

Kudos to @shaunacitynews for confronting men who yelled obscenities on camera. #ItsNeverOkay

The Toronto FC also issued a statement condemning the actions of the fans in question, saying the fans will be permanently banned from the stadium if they’re identified.

Perhaps unilaterally saying “ban men” is a bit strong. But “ban drunk male sports fans from saying misogynistic, degrading things to female reporters while they’re on the air” is definitely within reason.