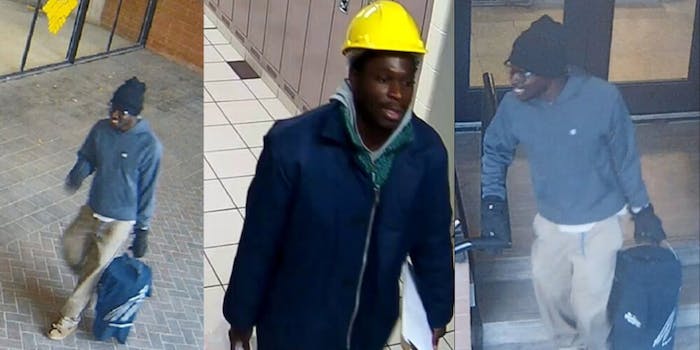 Guy suspected of throwing buckets of poop on people arrested

He had five victims in four days.

As if preparing for finals isn’t hard enough under normal circumstances, a man has been arrested for allegedly throwing buckets of poop on people on and around Toronto university campuses.

The first report of a poop bucket attack came on Nov. 22 when a man walked into the Robarts Library at the University of Toronto and dumped the contents of the bucket he was carrying on two people in the library. One student who witnessed the incident told CTV that she thought it was coffee until the smell reached her. “I thought I was going to faint,” she said. “Me and my friends packed up our stuff and ran out of the room.”

Two days later, two more people were hit with what the Toronto Police Service described as “liquefied fecal matter.” This time it was in a library at York University. The next day, the man with the bucket full of liquified poop delivered the same nasty surprise to a woman walking on the street in the University of Toronto area.

On Monday, Toronto Police released images from security footage of the suspect, hoping to prevent him from continuing his nasty crimes. People noted that in two of the pictures, the suspect appeared to be smiling gleefully.

Please consider a retweet. This man is alleged to be throwing feces on people in Toronto. If you know who he is call Toronto Police 416-808-2222 or remain anonymous by contacting Crime Stoppers 1-800-222-8477 or https://t.co/s26uSiNpM8 ^sm pic.twitter.com/AyJHBVF0P1

Hope he smiles like that for his mug shot too

there's a guy in toronto dumping poop on people in libraries and i really like how happy he looks about it pic.twitter.com/V7g4XCQNwk

It certainly wasn’t funny for the victims, but people on the internet couldn’t help but make jokes about the crappy situation.

I never thought my biggest concern while waking the streets of Toronto would be someone dumping poop on people… poop dude, who hurt you?

where does poop bandit stand in the hierarchy of social media–friendly toronto capers? below ikea monkey, naturally, but he's already ahead of the capybaras, chair girl and crane girl. probably forgetting some here

The viral pictures helped police find the suspect quickly. A news release from the Toronto Police Service stated that 23-year-old Samuel Opoku was arrested around 6pm on Monday under suspicion of carrying out the poop bucket attacks. He has been charged with five counts of assault with a weapon and five counts of mischief interfering with property. He is scheduled to appear in court on Wednesday.