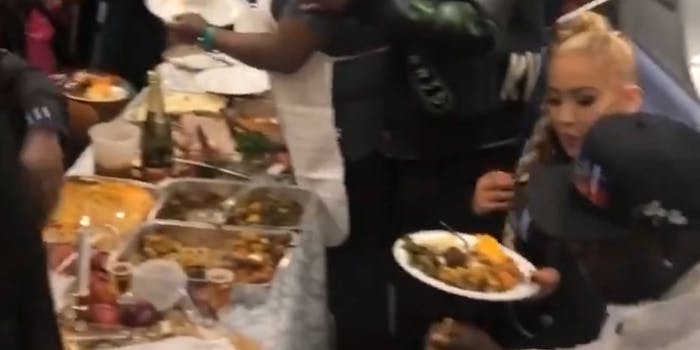 These people packed a Thanksgiving feast into a subway car

For better or for worse, Thanksgiving no longer passes without a social media feed full of #friendsgiving photos. But this year, a group of New Yorkers redefined conventional Thanksgiving by hosting their feast on the subway.

A TikTok shared on Twitter by @MickeyG77 on Monday shows a packed L train car with riders surrounding a dinner table. The meal hits all of the stops with green bean casserole, mac and cheese, and even a decorative tablecloth. One woman behind the table serves up the Thanksgiving staples.

“Showtime! Showtime!” @MickeyG77 tweeted with the video. The account that originally posted the TikTok appears to have been deleted.

“Only New Yorkers could make a 2×8 ft Thanksgiving spread for 250 (subway car capacity) and still make room for others. Bless,” @ramonctaylor tweeted.

The MTA allows eating on trains but blockage of the pathway caused by the Thanksgiving feast would likely be prohibited by police. Cuomo recently issued 500 extra police officers to patrol the subway system to combat a “rise in crime,” according to the New York Times. There were no signs of police intervention in the TikTok video.