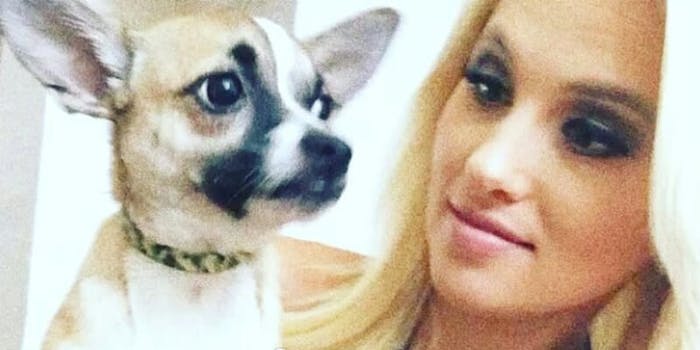 Tomi Lahren may have just admitted to animal abuse

There's nothing funny about animal abuse.

Tomi Lahren has said a lot of awful things, but admitting to kicking her dog could be one of the worst.

The Fox News contributor posted a video to her Instagram story Wednesday morning showing her dog, Kota, wagging her tail, TMZ reported. In the background, Lahren scolds the dog for “chewing on her damn bone as loud as she possibly could” during the pundit’s Fox & Friends appearance.

“So I had to kick her about five times during the show,” Lahren says.

The dog doesn’t look to be injured in the video, and we hope for Kota’s sake, it was a tasteless “joke”—not that there’s anything funny about kicking dogs. The conservative commentator has posted photos with the pup before.

Kota and I. Famous on the Internet. Lean with it. Rock with it. Xoxo. #Teamtomi #Kota #makeyoumissme

Neither Lahren nor Fox News has addressed the offhanded implication of animal abuse, but it’s not the first time she’s been called out on reckless social media remarks.

In January, she apologized for calling Rep. Joe Kennedy III “that little limp dick” and made a transphobic “joke” comparing him to Caitlyn Jenner.

My comments on my personal Instagram about Kennedy’s response were inappropriate and I take full responsibility for that. I got too upset. I sincerely apologize.