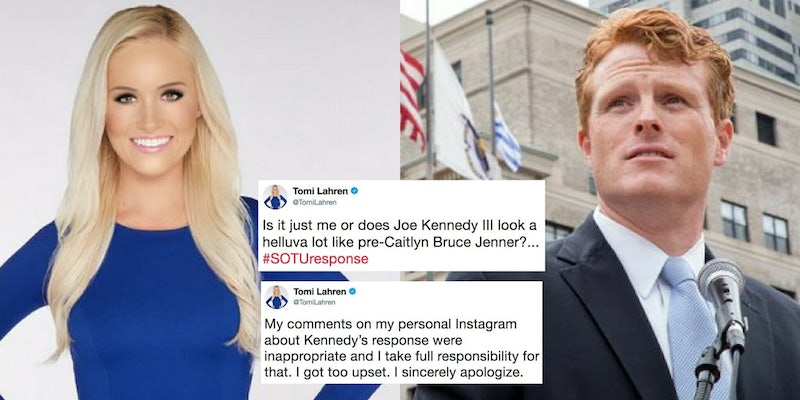 She's apologized for calling him a 'limp dick,' but has since gone after his 'ginger' hair.

Fox News commentator Tomi Lahren is apologizing for getting “too upset” and going full-snowflake after President Donald Trump‘s first State of the Union address, having called Rep. Joe Kennedy a “little limp dick” and making a transphobic “joke” about him and Caitlyn Jenner.

On Instagram, Lahren called Kennedy, who delivered the Democratic rebuttal, a “little limp dick,” tweeted that he’s an “impotent little ginger kid,” and made a transphobic “joke” by comparing his appearance to that of Jenner before she came out as transgender, using her dead name in the insult as well. Kennedy invited a transgender soldier to the State of the Union and spoke out against bullying of transgender children during his rebuttal, as well.

Lahren has since apologized for her comments, writing on Twitter Wednesday night that she got “too upset,” on her “personal Instagram,” an attempt to distance her insults from her employer Fox News.

My comments on my personal Instagram about Kennedy’s response were inappropriate and I take full responsibility for that. I got too upset. I sincerely apologize.

Several of these comments were deleted from her Instagram Story and Twitter account on Wednesday night after she issued an apology, but some were still accessible as of Thursday morning. Many of the posts have been documented by journalist Yashar Ali.

Of the comments that Lahren temporarily kept on her social media accounts, Lahren fixated on Kennedy’s red hair, using the term “ginger” in what appears to be an insult several times, and compared him to Jenner.

Lahren also took vitriolic shots on Twitter, where she has nearly a million followers.

“Is it just me or does Joe Kennedy III look a helluva lot like pre-Caitlyn Bruce Jenner?… #SOTUresponse,” read one tweet that Lahren has since deleted.

“In Trump’s America, we say ALL LIVES MATTER you impotent little ginger kid. #SOTUresponse,” a second tweet read before also being deleted.

About 20 minutes before posting her apology Wednesday night, Lahren also posted another comparison of Kennedy and Jenner on Instagram, writing she wasn’t “wrong” about her transphobic comment.

Her fixation on emasculating Kennedy comes off as almost misogynistic, insinuating that being less than society’s standard of “a man” by being “impotent” or having a small penis, or being a woman like Jenner (or herself) is something of an insult.

Lahren’s insults struck a nerve across social media—particularly her transphobic jab at Jenner.

You don't get to excuse your transphobia with "I got too upset." https://t.co/KKWX4YvQOE

Homophobia can be cured, but unfortunately for Tammy, stupid cannot. https://t.co/vXcQT4hfjK

Tomi Lahren is not a good representative for conservatism. https://t.co/Ncrty5W9Ej

.@TomiLahren is an embarrassment to the conservative movement. https://t.co/4YUYBeOo36

Spokespeople for Kennedy’s office have yet to respond to requests for comment.