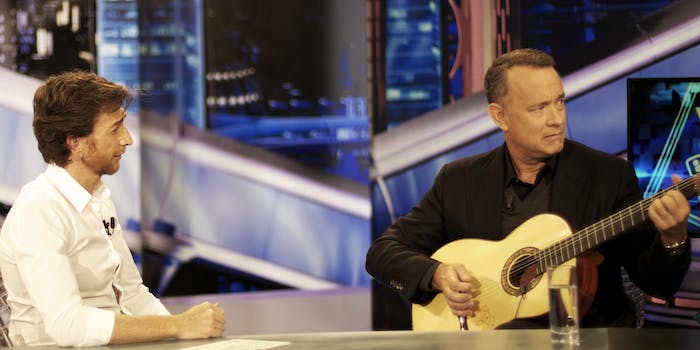 Tom Hanks is seemingly everywhere these days. First he lip-synced his way through a Carly Rae Jepsen music video, and now he’s becoming something of an entrepreneur with the help of some Girl Scouts.

The longtime actor and typewriter connoisseur was in Los Altos, Calif., on Feb. 28 to have his son Truman’s typewriter repaired, when he ran into a group of Girl Scouts who were selling cookies downtown. Hanks ended up buying four boxes of Girl Scout cookies and donated $20 to them, and while he was wearing sunglasses and a hat to disguise himself, the girls eventually recognized him and caught up to him.

“I’m still on cloud nine,” Archana Appanna, the mother of one of the Girl Scouts who met Hanks, told the Los Altos Town Crier. “We did not know who he was (at first) because he covered his face.” She described Hanks as being “so personal” and “so down to earth.”

He was gracious about the whole thing and agreed to take a picture with them.

@tomhanks and Thank you for supporting our local girl scouts #thanxhanx pic.twitter.com/VisfPeaI97

It was then that other people spotted Hanks and asked for pictures as well. He agreed—on the condition that they purchased a box of Girl Scout cookies from the group of girls.

The only thing that could be better for the girls? If Hanks’ effort helped them win the prize for selling the most boxes of Girl Scout cookies.