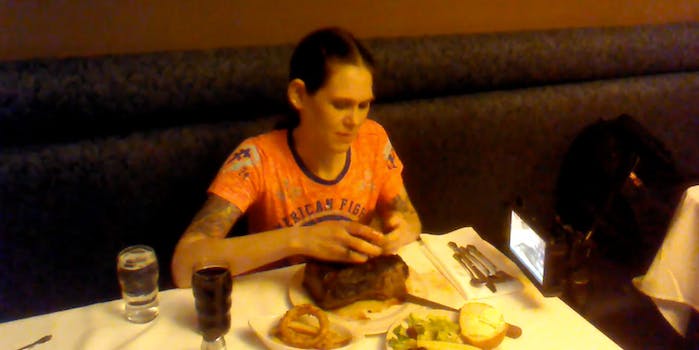 Watch this tiny lady eat a record-smashing amount of steak

This mom of four just broke a Guinness World Record.

One woman shattered a Guinness World Record by eating a 4.5 lb. steak in under three minutes.

Molly Schuyler, a mother of four from Nebraska, recently traveled to Sayler’s Old Country Kitchen in Portland to try its famous 72oz. Steak Challenge. Contestants have just one hour to eat the steak and all of the accompanying sides without leaving the table. Winners— and we hesitate to call them that—get a free meal.

Apparently 1,500 people have attempted the feat since the challenge started in 1948 and only about 500 have succeeded.

The previous record was held by Peter Czerwinski, who successfully ate a 72 ounce steak in 6 minutes and 48 seconds. Schuyler did it in less than half the time.

“[It’s] an unexplained phenomenon; I was just born that way,” Schuyler told KPTV. “I started doing this about a year ago, and I guess it’s like a stupid-human trick.”

Schuyler has been a competitive eater for about a year now. She has already qualified for this year’s Wing Bowl 22 and has put many of her record-breaking eating challenges on her YouTube channel.