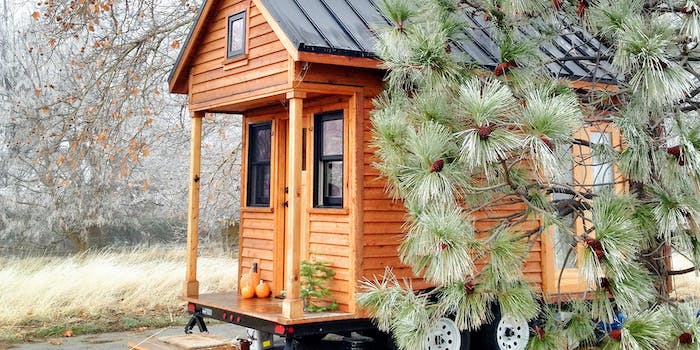 For most people, when it comes to houses, bigger is always better. But for members of the tiny house movement, a growing subculture of individuals who want to save money and conserve space by living in a miniature, portable domicile, the opposite is true. But what, you might ask, happens when a Tiny House lover falls in love with a McMansion devotee? How can their love blossom when their housing preferences are so dissimilar?

Tiny House Dating is “for people who place higher value on freedom, flexibility, and even sustainability than on stuff,” says Kai Rostcheck, the founder of the website and proprietor of I Love Tiny Houses, a website devoted to tiny living.  Rostcheck recently told Outside that Tiny House Dating is comparable to a dating site exclusively for nonsmokers, in that it serves as a filter only for those who are interested in downsizing their way of life.

Due to increased site traffic over the past few hours, Tiny House Dating’s server is currently down, so I couldn’t check out the website to see exactly what kind of people are interested in such a service (given the timing—and the April 1 deadline for an I Love Tiny Houses free baseball tee contest—the possibility that Tiny House Dating is an April Fool’s hoax should at least be considered).

But if nothing else, the Tiny House movement itself seems relatively legit—it’s been covered on Oprah and ABC News, and videos of tiny houses on Rostcheck’s website have garnered nearly 27 million views. Proving that when your ex-girlfriend told you that size doesn’t matter, she was totally right.

H/T Outside | Photo by rowdykittens/Flickr (CC BY 2.0)